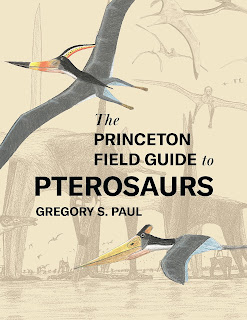 PUBLISHER’S SUMMARY: The most up-to-date and authoritative illustrated guide to the marvelous flying reptiles that dominated the skies of the Mesozoic for 160 million years.

Once seen by some as evolutionary dead-enders, pterosaurs were vigorous winged reptiles capable of thriving in an array of habitats and climates, including polar winters. The Princeton Field Guide to Pterosaurs transforms our understanding of these great Mesozoic archosaurs of the air. This incredible guide covers 115 pterosaur species and features stunning illustrations of pterosaurs ranging in size from swallows to small sailplanes, some with enormous, bizarre head crests and elongated beaks. It discusses the history of pterosaurs through 160 million years of the Mesozoic―including their anatomy, physiology, locomotion, reproduction, growth, and extinction―and even gives a taste of what it might be like to travel back to the Mesozoic. This one-of-a-kind guide also challenges the common image of big pterosaurs as ultralights that only soared, showing how these spectacular creatures could be powerful flappers as heavy as bears.

RECOMMENDATION: A must have for anyone with an interest in Pterosaurs! 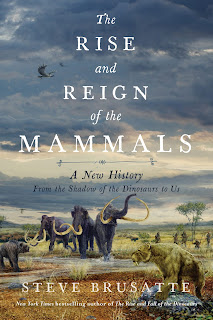 PUBLISHER’S SUMMARY: We humans are the inheritors of a dynasty that has reigned over the planet for nearly 66 million years, through fiery cataclysm and ice ages: the mammals. Our lineage includes saber-toothed tigers, woolly mammoths, armadillos the size of a car, cave bears three times the weight of a grizzly, clever scurriers that outlasted Tyrannosaurus rex, and even other types of humans, like Neanderthals. Indeed humankind and many of the beloved fellow mammals we share the planet with today—lions, whales, dogs—represent only the few survivors of a sprawling and astonishing family tree that has been pruned by time and mass extinctions. How did we get here?

In his acclaimed bestseller The Rise and Fall of the Dinosaurs—hailed as “the ultimate dinosaur biography” by Scientific American—American paleontologist Steve Brusatte enchanted readers with his definitive history of the dinosaurs. Now, picking up the narrative in the ashes of the extinction event that doomed T. rex and its kind, Brusatte explores the remarkable story of the family of animals that inherited the Earth—mammals— and brilliantly reveals that their story is every bit as fascinating and complex as that of the dinosaurs.

Beginning with the earliest days of our lineage some 325 million years ago, Brusatte charts how mammals survived the asteroid that claimed the dinosaurs and made the world their own, becoming the astonishingly diverse range of animals that dominate today’s Earth. Brusatte also brings alive the lost worlds mammals inhabited through time, from ice ages to volcanic catastrophes. Entwined in this story is the detective work he and other scientists have done to piece together our understanding using fossil clues and cutting-edge technology.

A sterling example of scientific storytelling by one of our finest young researchers, The Rise and Reign of the Mammals illustrates how this incredible history laid the foundation for today’s world, for us, and our future.

RECOMMENDATION: A must have for anyone with an interest in mammalian evolution! 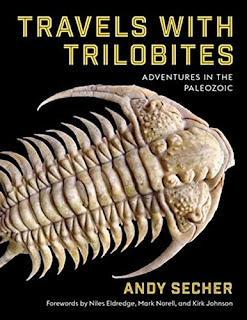 PUBLISHER’S SUMMARY: Trilobites were some of the most successful and versatile organisms ever to exist. Among the earliest forms of complex animal life, these hard-shelled marine invertebrates inhabited the primal seas of the Paleozoic Era. Their march through evolutionary time began in the Lower Cambrian, some 521 million years ago, and lasted until their demise at the end of the Permian, more than 250 million years later. During this vast stretch of planetary history, these adaptable animals filled virtually every available undersea niche, evolving into more than 25,000 scientifically recognized species.
In Travels with Trilobites, Andy Secher invites readers to come along in search of the fossilized remains of these ancient arthropods. He explores breathtaking paleontological hot spots around the world―including Alnif, Morocco, on the edge of the Sahara Desert; the Sakha Republic, deep in the Siberian wilderness; and Kangaroo Island, off the coast of South Australia―and offers a behind-the-scenes look at museums, fossil shows, and life on the collectors’ circuit. The book features hundreds of photographs of unique specimens drawn from Secher’s private collection, showcasing stunning fossil finds that highlight the diversity, complexity, and beauty of trilobites. Entertaining and informative, Travels with Trilobites combines key scientific information about these captivating creatures with wry, colorful observations and inside stories from one of the world’s most prolific collectors.

RECOMMENDATION: A must have for anyone with an interest in trilobites! 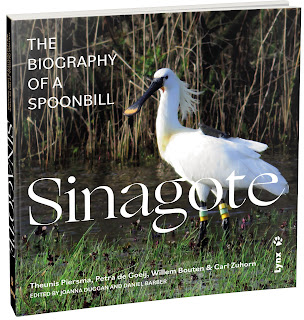 PUBLISHER’S SUMMARY:  This book tells the story of a spoonbill the authors have called Sinagote, a female bird born on the island of Vlieland, in the Netherlands. In her name, she carries the words ‘Sina’, the Breton name of the village in Britanny she returns to every autumn, and ‘gote’ which means ‘girl from’.

This story is about more spoonbills than just Sinagote. It’s even about much more than spoonbills and the connections between them. It’s also about the connections between countries in Europe and Africa, between the people who live and work there, who have an affection for spoonbills and work for their well-being. Part love story, part success story, Sinagote, The Biography of a Spoonbill describes the importance of looking beyond our national borders in the protection of migratory birds.

With the involvement of more than 9000 citizen scientists and the volunteers of the Spoonbill Working Group, the Dutch research on spoonbills along the East Atlantic migratory route is considered authoritative. Based on work at the University of Groningen, the NIOZ Royal Netherlands Institute for Sea Research, the University of Amsterdam and the Netherlands’ State Forest Service, together with amateur photographer Michiel Muller, this is a passionately told story.

RECOMMENDATION: A must have for anyone with an interest in the Eurasian Spoonbill! 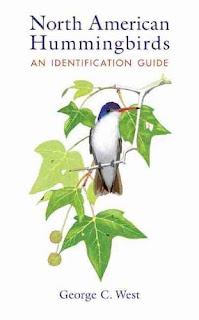 PUBLISHER’S SUMMARY: Designed to help birders and banders identify, age, and sex all seventeen species of hummingbirds found in North America, this is the only identification guide devoted entirely to hummingbirds that includes up-close, easy-to-use illustrations. It also provides information on the eight species that have been reported but rarely seen in North America.

On first viewing hummingbirds are often a blur of fast-moving color. However, when they perch and hover they can be observed, and the size, shape, and color; the proportions of the body, bill, throat, and tail; the wing feather pattern; and the birds' behavior are crucial to accurate identification. The author's concise descriptions and illustrations pinpoint all these features in clear, jargon-free language. Anyone who loves hummingbirds will welcome the information he provides. 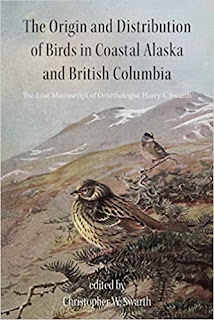 PUBLISHER’S SUMMARY: At the time of his death in 1935, Harry S. Swarth, head of the Mammalogy and Ornithology Departments at the California Academy of Sciences in San Francisco, had been preparing a manuscript reflecting on twenty-five years of his research in coastal Alaska and British Columbia. “The Distribution and Migrations of Birds in Adjacent Alaska and British Columbia” summarized Swarth’s research, ideas, and conjectures on the bird life in the region, including theories about when and how birds populated this vast territory after the retreat of glaciers near the end of the Pleistocene. Drawing on his field experiences and his forty published scientific papers, Swarth’s manuscript represented state-of-the-art science for the time. And his ideas hold up; his papers are still cited by ornithologists today.

In 2019, Christopher Swarth, Harry’s grandson and a scientist in his own right, discovered the forgotten manuscript. This book includes the original unpublished manuscript, accompanied by contextual essays from contemporary ornithologists who examine the impact and relevance of Swarth’s research on coastal bird diversity, fox sparrow migration, and the systematic puzzle of the timberline sparrow. Expedition maps display field camps and exploration routes, and species checklists illustrate the variety of birds observed at key field sites. To bring additional color and insight, The Origin and Distribution of Birds in Coastal Alaska and British Columbia also includes excerpts from Harry Swarth’s field notes, a comprehensive list of Harry Swarth’s publications, and a glossary with historic and contemporary bird names. Naturalists, ornithologists, birders, and all those who want to learn more about the natural history of the region will delight in the rediscovery of this long-lost treasure.
RECOMMENDATION: A must have for anyone with an interest in the ornithological history of the region! 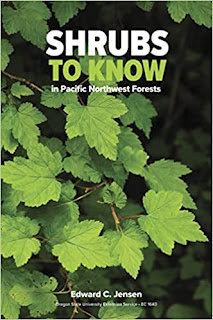 7) Jensen, Edward C.. Shrubs to Know in Pacific Northwest Forests. 2022. Oregon State University Press. Paperback: 141 pages. Price: $15.00 U.S.
PUBLISHER’S SUMMARY: This full-color, simple-to-use field guide makes shrub identification easy and fun. It features 100 of the most common shrubs that grow in and around Pacific Northwest forests—from southern British Columbia to northern California and from the Pacific Ocean to the northern Rockies. It includes an overview of shrub communities in the Pacific Northwest; more than five hundred color photos; individual range maps and complete descriptions for each species; notes on range and habitat, response to disturbance, traditional and current uses, and origin of names; glossary of identification terms; and an easy-to-use, well-tested identification key.
RECOMMENDATION: A must have for anyone with an interest in the flora of the region! 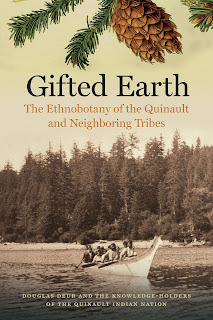 8) Deur, Douglas. Gifted Earth: The Ethnobotany of the Quinault and Neighboring Tribes. 2022. Oregon State University Press. Paperback: 250 pages. Price: $29.95 U.S.
PUBLISHER’S SUMMARY: Gifted Earth features traditional Native American plant knowledge, detailing the use of plants for food, medicines, and materials. It presents a rich and living tradition of plant use within the Quinault Indian Nation in a volume collaboratively developed and endorsed by that tribe.

The Quinault Reservation on the Olympic Peninsula of Washington state is a diverse tribal community, embodying the traditional knowledge of tribes along the entire Pacific Northwest coast. Its membership consists of descendants of many tribes—from the northwestern Olympic Peninsula to the northern Oregon coast—including the Quinault, but also many others who were relocated to the reservation in the nineteenth and early twentieth centuries. Individuals descended from these tribal communities, including Chinook, Chehalis, Hoh, Quileute, Queets, Cowlitz, Tillamook, Clatsop, and others, have contributed to Gifted Earth, giving it remarkable breadth and representation.

A celebration of enduring Native American knowledge, this book will help non-specialists as they discover the potential of the region’s wild plants, learning how to identify, gather, and use many of the plants that they encounter in the Northwestern landscape. Part ethnobotanical guide and part “how-to” manual, Gifted Earth also prepares plant users for the minor hazards and pitfalls that accompany their quest—from how to avoid accidentally eating a bug hidden within a salal berry to how to prevent blisters when peeling the tender stalks of cow parsnip.

As beautiful as it is informative, Gifted Earth sets the standard for a new generation of ethnobotanical guides informed by the values, vision, and voice of Native American communities eager to promote a sustainable, balanced relationship between plant users and the rich plant communities of traditional tribal lands.
RECOMMENDATION: A must have for anyone with an interest in the ethnobotany of the region! 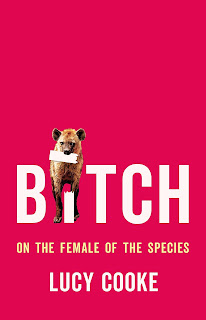 9) Cooke, Lucy. Bitch: On the Female of the Species. 2022. Basic Books. Hardbound: ‎ 400 pages. Price: $30.00 U.S.
PUBLISHER’S SUMMARY:
A fierce, funny, and revolutionary look at the queens of the animal kingdom.
Studying zoology made Lucy Cooke feel like a sad freak. Not because she loved spiders or would root around in animal feces: all her friends shared the same curious kinks. The problem was her sex. Being female meant she was, by nature, a loser.

Since Charles Darwin, evolutionary biologists have been convinced that the males of the animal kingdom are the interesting ones-- dominating and promiscuous, while females are dull, passive, and devoted.

In Bitch, Cooke tells a new story. Whether investigating same-sex female albatross couples that raise chicks, murderous mother meerkats, or the titanic battle of the sexes waged by ducks, Cooke shows us a new evolutionary biology, one where females can be as dynamic as any male. This isn't your grandfather’s evolutionary biology. It’s more inclusive, truer to life, and, simply, more fun.
RECOMMENDATION: A must have for anyone with an interest in the female role in evolutionary biology.

Posted by Birdbooker at 1:10 PM