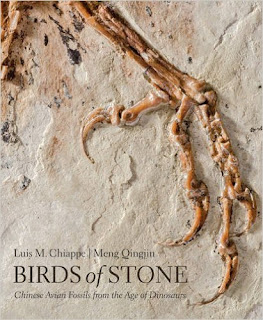 1) Chiappe, Luis M. and Meng Qingjin. Birds of Stone: Chinese Avian Fossils from the Age of Dinosaurs. 2016. Johns Hopkins University Press. Hardbound: 294 pages. Price: $85.00 U.S.
PUBLISHER'S SUMMARY: When fossils of birds from China’s Jehol region first appeared in scientific circles, the world took notice. These Mesozoic masterpieces are between 120 and 131 million years old and reveal incredible details that capture the diversity of ancient bird life. Paleontologists all over the world began to collaborate with Chinese colleagues as new and wondrous fossil-related discoveries became regular events. The pages of National Geographic and major scientific journals described the intricate views of feathers as well as food still visible in the guts of these ancient birds. Now, for the first time, a sweeping collection of the most interesting of Jehol’s avian fossils is on display in this beautiful book.

Birds of Stone makes visible the unexpected avian diversity that blanketed the earth just a short time (geologically speaking) after a dinosaur lineage gave rise to the first birds. Our visual journey through these fossils is guided by Luis M. Chiappe, a world expert on early birds, and Meng Qingjin, a leading figure in China's natural history museum community. Together, they help us understand the "meaning" of each fossil by providing straightforward narratives that accompany the full-page photographs of the Jehol discoveries.
Anyone interested in the history of life―from paleontologists to inquisitive birders―will find Birds of Stone an irresistible feast for the eyes and mind.
RECOMMENDATION: A well illustrated overview of these fossils. 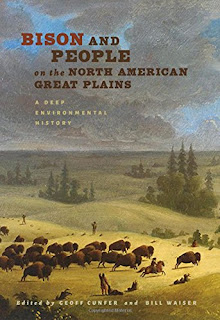 2) Cunfer, Geoff and Bill Waiser (editors). Bison and People on the North American Great Plains: A Deep Environmental History. 2016. Texas A&M University Press. Hardbound: 323 pages. Price: $60.00 U.S.
PUBLISHER'S SUMMARY: The near disappearance of the American bison in the nineteenth century is commonly understood to be the result of over-hunting, capitalist greed, and all but genocidal military policy. This interpretation remains seductive because of its simplicity; there are villains and victims in this familiar cautionary tale of the American frontier. But as this volume of groundbreaking scholarship shows, the story of the bison’s demise is actually quite nuanced.
Bison and People on the North American Great Plains brings together voices from several disciplines to offer new insights on the relationship between humans and animals that approached extinction. The essays here transcend the border between the United States and Canada to provide a continental context. Contributors include historians, archaeologists, anthropologists, paleontologists, and Native American perspectives.
This book explores the deep past and examines the latest knowledge on bison anatomy and physiology, how bison responded to climate change (especially drought), and early bison hunters and pre-contact trade. It also focuses on the era of European contact, in particular the arrival of the horse, and some of the first known instances of over-hunting. By the nineteenth century bison reached a “tipping point” as a result of new tanning practices, an early attempt at protective legislation, and ventures to introducing cattle as a replacement stock. The book concludes with a Lakota perspective featuring new ethnohistorical research.
Bison and People on the North American Great Plains is a major contribution to environmental history, western history, and the growing field of transnational history.
RECOMMENDATION:For those with a serious interest in the topic.
Posted by Birdbooker at 12:19 PM No comments: 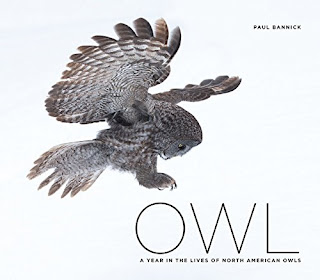 1) Bannick, Paul. Owl: A Year in the Lives of North American Owls. 2016.
Mountaineers Books. Hardbound: 224 pages. Price: $34.95 U.S.
PUBLISHER'S SUMMARY: In Owl, award-winning photographer Paul Bannick uses his intimate yet dramatic images to track four different nesting owl species, Northern Pygmy, Burrowing, Great Gray, and Snowy, throughout the course of one year and in four distinct habitats. Readers follow along at the nest as each stage in an owl's life is chronicled: courtship, mating, and nesting in spring; fledging and feeding of young in summer; dispersal and learning independence in fall; and finally, winter's migration.
RECOMMENDATION: Fans of Bannick's photography will enjoy this book.
Posted by Birdbooker at 5:05 PM No comments: 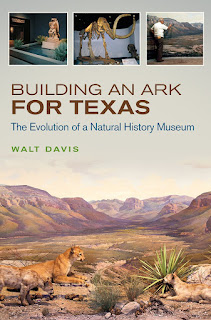 1) Davis, Walt. Building an Ark for Texas: The Evolution of a Natural History Museum. 2016. Texas A&M University Press. Hardbound: 218 pages. Price: $35.00 U.S.
PUBLISHER'S SUMMARY: Recounted through the eyes of a major participant, this book tells the story of the Dallas Museum of Natural History from its beginning in 1922 as a collection of specimens celebrating the plants and animals of Texas to its metamorphosis in 2012 as the gleaming Perot Museum of Nature and Science. The life of this museum was indelibly influenced by a colorful staff of scientists, administrators, and teachers, including a German taxidermist, a South American explorer, and a Milwaukee artist, each with a compelling personal investment in this museum and its mission.
From the days when meticulously and skillfully prepared dioramas were the hallmark of natural history museums to the era of blockbuster exhibits and interactive education, Walt Davis traces the changing expectations of and demands on museums, both public and private, through an engaging, personal look back at the creation and development of one exceptional institution, whose building and original exhibits are now protected as historical landmarks at Fair Park in Dallas.
RECOMMENDATION:  For those with an interest in natural history museums.

Posted by Birdbooker at 8:32 PM No comments: 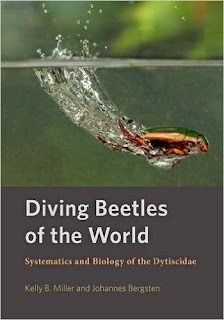 1) Miller, Kelly B. and Johannes Bergsten. Diving Beetles of the World: Systematics and Biology of the Dytiscidae. 2016. Johns Hopkins University Press. Hardbound: 320 pages. Price: $150.00 U.S.
PUBLISHER'S SUMMARY: Among the hundreds of thousands of species of beetles, there is one family, containing some 4,300 species, that stands out as one of the most diverse and important groups of aquatic predatory insects. This is the Dytiscidae, whose species are commonly known as diving beetles. No comprehensive treatment of this group has been compiled in over 130 years, a period during which a great many changes in classification and a near quadrupling of known species has occurred.

In Diving Beetles of the World, Kelly B. Miller and Johannes Bergsten provide the only full treatments of all 188 Dytiscid genera ever assembled. Entomologists, systematists, limnologists, ecologists, and others with an interest in aquatic systems or insect diversity will find these extensively illustrated keys and taxon accounts immensely helpful. The keys make it possible to identify all taxa from subfamily to genera, and each key and taxon treatment is accompanied by both photographs and detailed pen-and-ink drawings of diagnostic features.
Every genus account covers body length, diagnostic characters, classification, species diversity, a review of known natural history, and world distribution. Each account is also accompanied by a range map and at least one high-resolution habitus image of a specimen. Diving beetles are fast becoming important models for aquatic ecology, world biogeography, population ecology, and animal sexual evolution and, with this book, the diversity of the group is finally accessible.
RECOMMENDATION: For those with a serious interest in diving beetles.
Posted by Birdbooker at 2:37 PM No comments: 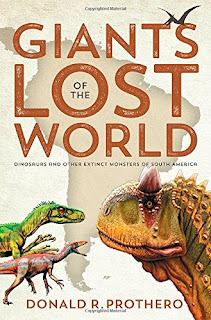 1) Prothero, Donald R.. Giants of the Lost World: Dinosaurs and Other Extinct Monsters of South America. 2016. Smithsonian Books. Hardbound: 174 pages. Price: $27.95 U.S.
PUBLISHER'S SUMMARY: More than a hundred years ago, Sir Arthur Conan Doyle wrote a novel called The Lost World with the exciting premise that dinosaurs and other prehistoric beasts still ruled in South America. Little did Conan Doyle know, there were terrifying monsters in South America--they just happened to be extinct. In fact, South America has an incredible history as a land where many strange creatures evolved and died out. In his book Giants of the Lost World: Dinosaurs and Other Extinct Monsters of South America, Donald R. Prothero uncovers the real science and history behind this fascinating story. The largest animal ever discovered was the huge sauropod dinosaur Argentinosaurus, which was about 130 feet long and weighed up to 100 tons. The carnivorous predator Giganotosaurus weighed in at more than 8 tons and measured more than 47 feet long, dwarfing the T. rex in comparison. Gigantic anacondas broke reptile records; possums evolved into huge saber-toothed predators; and ground sloths grew larger than elephants in this strange, unknown land. Prothero presents the scientific details about each of these prehistoric beasts, provides a picture of the ancient landscapes they once roamed, and includes the stories of the individuals who first discovered their fossils for a captivating account of a lost world that is stranger than fiction.
RECOMMENDATION: For those with an interest in vertebrate fossils of the region.

Posted by Birdbooker at 2:33 PM No comments: