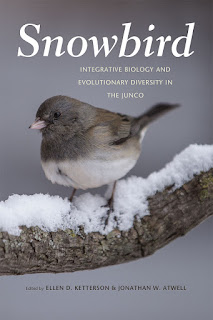 1) Ketterson, Ellen D.  and Jonathan W. Atwell (editors). Snowbird: Integrative Biology and Evolutionary Diversity in the Junco. 2016. The University of Chicago Press. Hardbound: 389 pages. Price: $60.00 U.S.
PUBLISHER'S SUMMARY: At birdfeeders and in backyards across North America, the dark-eyed junco, or snowbird, can be found foraging for its next meal. With an estimated population of at least 630 million, juncos inhabit forests, parks, and even suburban habitats, making them one of the continent’s most abundant and easily observable songbirds. But while common and widespread, juncos also exhibit extraordinary diversity in color, shape, size, and behavior across their range, making them ideal study subjects for biologists interested in ecology and evolutionary diversification.
Intended for scholars, citizen scientists, and amateur ornithologists, alike, Snowbird synthesizes decades of research from the diverse and talented researchers who study the Junco genus. Though contributors approach their subject from a variety of perspectives, they share a common goal: elucidating the organismal and evolutionary processes by which animals adapt and diversify in response to environmental change. Placing special emphasis on the important role that underlying physiological, hormonal, and behavioral mechanisms play in these processes, Snowbird not only provides a definitive exploration of the junco’s evolutionary history and behavioral and physiological diversity but also underscores the junco’s continued importance as a model organism in a time of rapid global climate change. By merging often disparate biological fields, Snowbird offers biologists across disciplines an integrative framework for further research into adaptation, population divergence, and the formation of new species.
RECOMMENDATION: A must have for anyone with a serious interest in juncos.
Posted by Birdbooker at 8:22 PM No comments:

1) Reeber, Sébastien.Waterfowl of North America, Europe, and Asia: An Identification Guide. 2015. Princeton University Press. Hardbound: 656 pages. Price: $45.00 U.S.
PUBLISHER'S SUMMARY: This is the ultimate guide for anyone who wants to identify the ducks, geese, and swans of North America, Europe, and Asia. With 72 stunning color plates (that include more than 920 drawings), over 650 superb photos, and in-depth descriptions, this book brings together the most current information on 84 species of Eurasian and North American waterfowl, and on more than 100 hybrids. The guide delves into taxonomy, identification features, determination of age and sex, geographic variations, measurements, voice, molt, and hybridization. In addition, the status of each species is treated with up-to-date details on distribution, population size, habitats, and life cycle. Color plates and photos are accompanied by informative captions and 85 distribution maps are also provided. Taken together, this is an unrivaled, must-have reference for any birder with an interest in the world's waterfowl.
RECOMMENDATION: A MUST have for anyone with an interest in waterfowl. I especially like the treatment of hybrids.
Posted by Birdbooker at 3:50 PM No comments:

1) Heaney, Lawrence R., Danilo S. Balete, and Eric A. Rickart. The Mammals of Luzon Island: Biogeography and Natural History of a Philippine Fauna. 2016. Johns Hopkins University Press. Hardbound: 287 pages. Price: $75.00 U.S.
PUBLISHER'S SUMMARY: Revealing the astounding mammalian diversity found on the largest Philippine island, The Mammals of Luzon Island is a unique book that functions both as a field guide and study of tropical fauna. The book features 120 fully illustrated species profiles and shows how the mammals fit into larger questions related to evolution, ecology, and biogeography. Luzon’s stunning variety of mammals includes giant fruit-eating bats; other bats so small that they can roost inside bamboo stems; giant plant-eating rodents that look like, but are not, squirrels; shrews that weigh less than half an ounce; the rapidly disappearing Philippine warty pig; and the long-tailed macaque, Luzon’s only nonhuman primate.
While celebrating Luzon’s remarkably rich mammal fauna, the authors also suggest conservation strategies for the many species that are under threat from a variety of pressures. Based on a century of accumulated data and fifteen years of intensive study, The Mammals of Luzon Island delivers a message that will appeal equally to scientists, conservationists, and ecologically minded travelers.
RECOMMENDATION: A must have for those with an interest in the mammals of the region.
Posted by Birdbooker at 8:10 PM No comments: 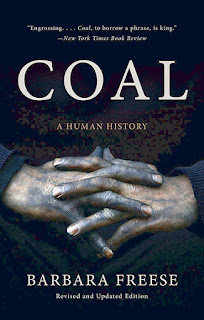 1) Freese, Barbara. Coal: A Human History. 2003 (2016). Basic Books. Paperback: 360 pages. Price: $17.99 U.S.
PUBLISHER'S SUMMARY: In this remarkable book, Barbara Freese takes us on a rich historical journey that begins hundreds of millions of years ago and spans the globe. Prized as “the best stone in Britain” by Roman invaders who carved jewelry out of it, coal has transformed societies, launched empires, and expanded frontiers. It made China an eleventh-century superpower, inspired the Communist Manifesto, and helped the North win the American Civil War. Yet coal's transformative power has come at tremendous cost, from the blackening of our lungs and skies, to the perils of mining, to global warming. Now updated with a new chapter describing the high-stakes conflict between coal's defenders and those working to preserve a livable climate, Coal offers a captivating history of the mineral that helped build the modern world but now endangers our future.
RECOMMENDATION: A must read for those with an interest in the topic.
Posted by Birdbooker at 8:28 PM No comments: 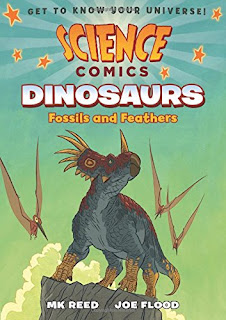 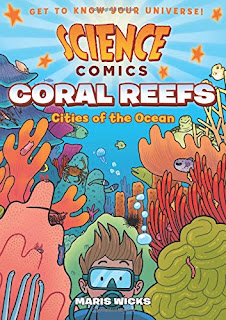 1) Reed, MK and Joe Flood. Science Comics: Dinosaurs: Fossils and Feathers. 2016. First Second. Paperback: 120 pages. Price: $9.99 U.S.
PUBLISHER'S SUMMARY: Every volume of Science Comics offers a complete introduction to a particular topic--dinosaurs, coral reefs, the solar system, volcanoes, bats, flying machines, and more. These gorgeously illustrated graphic novels offer wildly entertaining views of their subjects. Whether you're a fourth grader doing a natural science unit at school or a thirty-year-old with a secret passion for airplanes, these books are for you!

This volume: in Dinosaurs, learn all about the history of paleontology! This fascinating look at dinosaur science covers the last 150 years of dinosaur hunting, and illuminates how our ideas about dinosaurs have changed--and continue to change.

RECOMMENDATION: Of these two books, I like the Dinosaurs one the best.
Posted by Birdbooker at 8:37 PM No comments:

1) Fitter, Julian, Daniel Fitter & David Hosking. Wildlife of the Galápagos: Second Edition. 2016. Princeton University Press. Paperback: 288 pages. Price: $19.95 U.S.
PUBLISHER'S SUMMARY: Since its first publication more than a decade ago, Wildlife of the Galápagos has become the definitive, classic field guide to the natural splendors of this amazing part of the world. Now fully updated, this essential and comprehensive guide has been expanded to include the more than 400 commonly seen birds, mammals, reptiles, invertebrates, and plants, and other coastal and marine life of this wondrous archipelago. Over 650 stunning color photographs, maps, and drawings are accompanied by accessible, descriptive text. This new edition includes information about all the common fish of the region and Spanish names are featured for the first time. There is also a revised section that discusses the islands' history, climate, geology, and conservation, with the most current details on visitor sites.
RECOMMENDATION: A must have for naturalists visiting these islands.
Posted by Birdbooker at 8:10 PM No comments:

1) Fenolio, Danté. Life in the Dark: Illuminating Biodiversity in the Shadowy Haunts of Planet Earth. 2016. Johns Hopkins University Press. Hardbound: 317 pages. Price: $39.95 U.S.
PUBLISHER'S SUMMARY: Deep inside caves, at the bottoms of oceans and lakes, beneath the ground: these concealed habitats are absent of sunlight. This strange and fascinating world of complete darkness is not a solitary place—it is inhabited by millions of life forms. Yet most humans—creatures of daylight—have never seen any of them. Until now.
In this fascinating—sometimes eerie—book, extreme wildlife photographer and scientist Danté Fenolio brings the denizens of these shadowy haunts into focus. Life in the Dark shows us the many ways in which life forms have adapted to lightless environments, including refinements of senses, evolution of unique body parts, and illumination using "biological flashlights."
With more than 200 mesmerizing color photographs, Life in the Dark unveils bizarre creatures like the firefly squid, the giant Amazonian catfish, the Chinese cavefish, and even the human bot fly, which lives in the darkness beneath its host’s skin. Fenolio’s rich and vibrant images shed new light on the world’s fascinating creatures of darkness.
RECOMMENDATION: A well illustrated introduction to these creatures!
Posted by Birdbooker at 8:04 PM No comments: 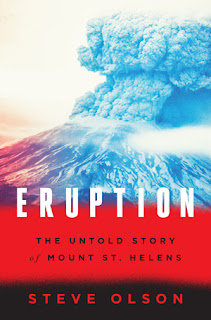 1) Olson, Steve. Eruption: The Untold Story of Mount St. Helens. 2016. W.W. Norton. Hardbound: 300 pages. Price: $27.95 U.S.
PUBLISHER'S SUMMARY: Survival narrative meets scientific, natural, and social history in the riveting story of a volcanic disaster.
For months in early 1980, scientists, journalists, sightseers, and nearby residents listened anxiously to rumblings in Mount St. Helens, part of the chain of western volcanoes fueled by the 700-mile-long Cascadia fault. Still, no one was prepared when an immense eruption took the top off of the mountain and laid waste to hundreds of square miles of verdant forests in southwestern Washington State. The eruption was one of the largest in human history, deposited ash in eleven U.S. states and five Canadian provinces, and caused more than one billion dollars in damage. It killed fifty-seven people, some as far as thirteen miles away from the volcano’s summit.
Shedding new light on the cataclysm, author Steve Olson interweaves the history and science behind this event with page-turning accounts of what happened to those who lived and those who died.
Powerful economic and historical forces influenced the fates of those around the volcano that sunny Sunday morning, including the construction of the nation’s railroads, the harvest of a continent’s vast forests, and the protection of America’s treasured public lands. The eruption of Mount St. Helens revealed how the past is constantly present in the lives of us all. At the same time, it transformed volcanic science, the study of environmental resilience, and, ultimately, our perceptions of what it will take to survive on an increasingly dangerous planet.
Rich with vivid personal stories of lumber tycoons, loggers, volcanologists, and conservationists, Eruption delivers a spellbinding narrative built from the testimonies of those closest to the disaster, and an epic tale of our fraught relationship with the natural world.
RECOMMENDATION: For those with an interest in volcanoes and/or Washington State history.

Posted by Birdbooker at 8:14 PM No comments: