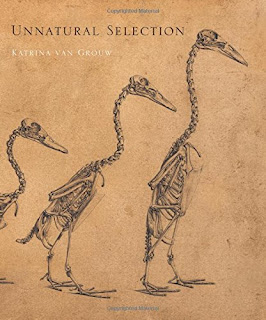 1) van Grouw, Katrina. Unnatural Selection. 2018. Princeton University Press. Hardbound: 284 pages. Price: $45.00 U.S.
PUBLISHER'S SUMMARY: Unnatural Selection is a stunningly illustrated book about selective breeding--the ongoing transformation of animals at the hand of man. More important, it's a book about selective breeding on a far, far grander scale―a scale that encompasses all life on Earth. We'd call it evolution.
A unique fusion of art, science, and history, this book celebrates the 150th anniversary of Charles Darwin's monumental work The Variation of Animals and Plants under Domestication, and is intended as a tribute to what Darwin might have achieved had he possessed that elusive missing piece to the evolutionary puzzle―the knowledge of how individual traits are passed from one generation to the next. With the benefit of a century and a half of hindsight, Katrina van Grouw explains evolution by building on the analogy that Darwin himself used―comparing the selective breeding process with natural selection in the wild, and, like Darwin, featuring a multitude of fascinating examples.
This is more than just a book about pets and livestock, however. The revelation of Unnatural Selection is that identical traits can occur in all animals, wild and domesticated, and both are governed by the same evolutionary principles. As van Grouw shows, animals are plastic things, constantly changing. In wild animals the changes are usually too slow to see―species appear to stay the same. When it comes to domesticated animals, however, change happens fast, making them the perfect model of evolution in action.
Suitable for the lay reader and student, as well as the more seasoned biologist, and featuring more than four hundred breathtaking illustrations of living animals, skeletons, and historical specimens, Unnatural Selection will be enjoyed by anyone with an interest in natural history and the history of evolutionary thinking.
RECOMMENDATION: If you have the author's The Unfeathered Bird, you will want this book!

Posted by Birdbooker at 12:13 PM No comments: 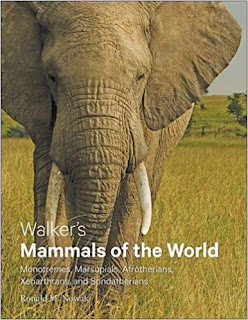 1) Nowak, Ronald M.. Walker's Mammals of the World: Monotremes, Marsupials, Afrotherians, Xenarthrans, and Sundatherians. 2018. Johns Hopkins University Press. Hardbound: 757 pages. Price: $99.95 U.S.
PUBLISHER'S SUMMARY: Since its first publication in 1964, Walker's Mammals of the World has become a favorite guide to the natural world for general readers and professionals alike. This new Walker’s volume is a completely revised and updated compendium of information on five of the earliest clades to diverge from ancient mammal stock. Uniquely comprehensive in inimitable Walker’s style, it incorporates a full account of every genus that has lived in the past 5,000 years. Every named species of each genus is listed in systematic order and accompanied by detailed descriptions of past and present range.

This new edition includes
• 500+ full-color images throughout
• citations to more than 2,200 new references
• extensive bioconservation data, with discussion of every species in an IUCN Red List threatened category
This volume’s thorough updates reflect 20 years of advances in our knowledge of taxonomy, ecology, behavior, life history, and conservation. Substantive changes to 100% of previously existing generic accounts, plus the addition of 17 entirely new generic accounts, double the information in the last edition on the 19 orders covered. The black-and-white illustrations of earlier editions have been replaced by over 500 superb new color images.
Remaining true to Ernest P. Walker’s vision, the text smoothly combines in-depth scholarship with a popular, readable style to preserve and enhance what the Washington Post called a "landmark of zoological literature."
RECOMMENDATION: If you have other titles in the Walker's Mammals of the World series, you'll want this one! 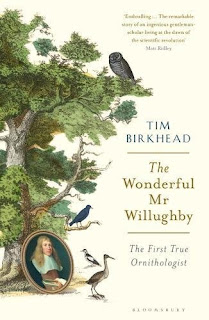 1) Birkhead, Tim. The Wonderful Mr Willughby: The First True Ornithologist. 2018. Bloomsbury. Hardbound: 353 pages. Price: $27.00 U.S.
PUBLISHER'S SUMMARY: Francis Willughby lived and thrived in the midst of the rapidly accelerating scientific revolution of the seventeenth century. Traveling with his Cambridge tutor John Ray, they decided to overhaul the whole of natural history by imposing order on its messiness and complexity. It was exhilarating, exacting, and exhausting work. Yet before their first book, Ornithology, could be completed, Willughby died in 1672. Since then, Ray's reputation has grown, obscuring that of his collaborator. Now, for the first time, Willughby's story and genius are given the attention they deserve.
In his too-short life, Francis Willughby helped found the Royal Society, differentiated birds through identification of their distinguishing features, and asked questions that were, in some cases, centuries ahead of their time. His discoveries and his approach to his work continue to be relevant--and revelatory--today. Tim Birkhead describes and celebrates how Willughby's endeavors set a standard for the way birds--and indeed the whole of natural history--should be studied. Rich with glorious detail, The Wonderful Mr Willughby is at once a fascinating insight into a thrilling period of scientific history and an authoritative, lively biography of one of its legendary pioneers.
RECOMMENDATION: For those with an interest in ornithological history.

Posted by Birdbooker at 3:34 PM No comments: