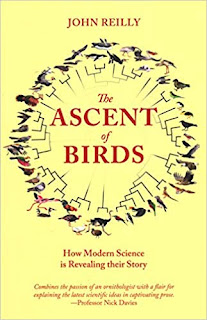 1) Reilly, John. The Ascent of Birds: How Modern Science Is Revealing Their Story. 2018. Pelagic Publishing. Hardbound: 340 pages. Price: $33.99 U.S.
PUBLISHER'S SUMMARY: When and where did the ancestors of modern birds evolve? What enabled them to survive the meteoric impact that wiped out the dinosaurs? How did these early birds spread across the globe and give rise to the 10,500-plus species we recognise today ― from the largest ratites to the smallest hummingbirds? Based on the latest scientific discoveries and enriched by personal observations, The Ascent of Birds sets out to answer these fundamental questions.

The Ascent of Birds is divided into self-contained chapters, or stories, that collectively encompass the evolution of modern birds from their origins in Gondwana, over 100 million years ago, to the present day. The stories are arranged in chronological order, from tinamous to tanagers, and describe the many dispersal and speciation events that underpin the world's 10,500-plus species. Although each chapter is spearheaded by a named bird and focuses on a specific evolutionary mechanism, the narrative will often explore the relevance of such events and processes to evolution in general.
The book starts with The Tinamou’s Story, which explains the presence of flightless birds in South America, Africa, and Australasia, and dispels the cherished role of continental drift as an explanation for their biogeography. It also introduces the concept of neoteny, an evolutionary trick that enabled dinosaurs to become birds and humans to conquer the planet.
The Vegavis's Story explores the evidence for a Cretaceous origin of modern birds and why they were able to survive the asteroid collision that saw the demise not only of dinosaurs but of up to three-quarters of all species.
The Duck's Story switches to sex: why have so few species retained the ancestral copulatory organ? Or, put another way, why do most birds exhibit the paradoxical phenomenon of penis loss, despite all species requiring internal fertilisation?
The Hoatzin's Story reveals unexpected oceanic rafting from Africa to South America: a stranger-than-fiction means of dispersal that is now thought to account for the presence of other South American vertebrates, including geckos and monkeys.
The latest theories underpinning speciation are also explored. The Manakin’s Story, for example, reveals how South America’s extraordinarily rich avifauna has been shaped by past geological, oceanographic and climatic changes, while The Storm-Petrel’s Story examines how species can evolve from an ancestral population despite inhabiting the same geographical area. The thorny issue of what constitutes a species is discussed in The Albatross's Story, while The Penguin’s Story explores the effects of environment on phenotype ― in the case of the Emperor penguin, the harshest on the planet.
Recent genomic advances have given scientists novel approaches to explore the distant past and have revealed many unexpected journeys, including the unique overland dispersal of an early suboscine from Asia to South America (The Sapayoa’s Story) and the blackbird's ancestral sweepstake dispersals across the Atlantic (The Thrush’s Story).
Additional vignettes update more familiar concepts that encourage speciation: sexual selection (The Bird-of-Paradise's Story); extended phenotypes (The Bowerbird's Story); hybridisation (The Sparrow's Story); and 'great speciators' (The White-eye's Story). Finally, the book explores the raft of recent publications that help explain the evolution of cognitive skills (The Crow's Story); plumage colouration (The Starling's Story); and birdsong (The Finch's Story).
RECOMMENDATION: A readable overview of avian evolution. 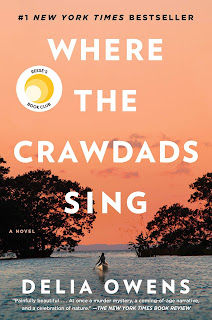 2) Owens, Delia. Where the Crawdads Sing. 2018. G.P. Putnam's Sons. Hardbound: 370 pages. Price: $26.00 U.S.
PUBLISHER'S SUMMARY: For years, rumors of the "Marsh Girl" have haunted Barkley Cove, a quiet town on the North Carolina coast. So in late 1969, when handsome Chase Andrews is found dead, the locals immediately suspect Kya Clark, the so-called Marsh Girl. But Kya is not what they say. Sensitive and intelligent, she has survived for years alone in the marsh that she calls home, finding friends in the gulls and lessons in the sand. Then the time comes when she yearns to be touched and loved. When two young men from town become intrigued by her wild beauty, Kya opens herself to a new life--until the unthinkable happens.
Perfect for fans of Barbara Kingsolver and Karen Russell, Where the Crawdads Sing is at once an exquisite ode to the natural world, a heartbreaking coming-of-age story, and a surprising tale of possible murder. Owens reminds us that we are forever shaped by the children we once were, and that we are all subject to the beautiful and violent secrets that nature keeps.
RECOMMENDATION: A well received first novel by the co-author of Cry of the Kalahari.

Posted by Birdbooker at 4:31 PM No comments: 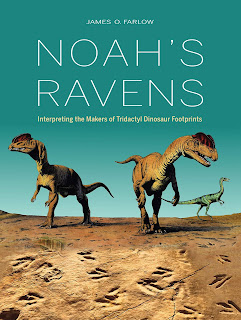 1) Farlow, James O.. Noah's Ravens: Interpreting the Makers of Tridactyl Dinosaur Footprints. 2018. Indiana University Press. Hardbound: 642 pages. Price: $85.00 U.S.
PUBLISHER'S SUMMARY: How can the tracks of dinosaurs best be interpreted and used to reconstruct them? In many Mesozoic sedimentary rock formations, fossilized footprints of bipedal, three-toed (tridactyl) dinosaurs are preserved in huge numbers, often with few or no skeletons. Such tracks sometimes provide the only clues to the former presence of dinosaurs, but their interpretation can be challenging: How different in size and shape can footprints be and yet have been made by the same kind of dinosaur? How similar can they be and yet have been made by different kinds of dinosaurs? To what extent can tridactyl dinosaur footprints serve as proxies for the biodiversity of their makers?

Profusely illustrated and meticulously researched, Noah’s Ravens quantitatively explores a variety of approaches to interpreting the tracks, carefully examining within-species and across-species variability in foot and footprint shape in nonavian dinosaurs and their close living relatives. The results help decipher one of the world’s most important assemblages of fossil dinosaur tracks, found in sedimentary rocks deposited in ancient rift valleys of eastern North America. Those often beautifully preserved tracks were among the first studied by paleontologists, and they were initially interpreted as having been made by big birds―one of which was jokingly identified as Noah’s legendary raven.
RECOMMENDATION: For those with a serious interest in dinosaur tracks.

Posted by Birdbooker at 12:31 PM No comments: 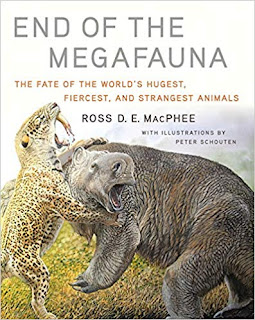 1) MacPhee, Ross D. E. and Peter Schouten. End of the Megafauna: The Fate of the World's Hugest, Fiercest, and Strangest Animals. 2018. W.W. Norton. Hardbound: 236 pages. Price: $35.00 U.S.
PUBLISHER'S SUMMARY: Until a few thousand years ago, creatures that could have been from a sci-fi thriller―including gorilla-sized lemurs, 500-pound birds, and crocodiles that weighed a ton or more―roamed the earth. These great beasts, or “megafauna,” lived on every habitable continent and on many islands. With a handful of exceptions, all are now gone.
What caused the disappearance of these prehistoric behemoths? No one event can be pinpointed as a specific cause, but several factors may have played a role. Paleomammalogist Ross D. E. MacPhee explores them all, examining the leading extinction theories, weighing the evidence, and presenting his own conclusions. He shows how theories of human overhunting and catastrophic climate change fail to account for critical features of these extinctions, and how new thinking is needed to elucidate these mysterious losses.
Along the way, we learn how time is determined in earth history; how DNA is used to explain the genomics and phylogenetic history of megafauna―and how synthetic biology and genetic engineering may be able to reintroduce these giants of the past. Until then, gorgeous four-color illustrations by Peter Schouten re-create these megabeasts here in vivid detail.
RECOMMENDATION: The artwork by Peter Schouten highlights this book! 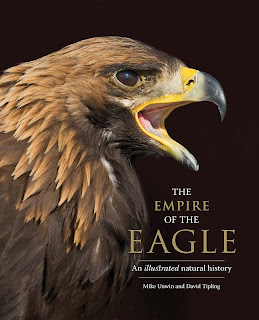 2) Unwin, Mike and David Tipling. The Empire of the Eagle: An Illustrated Natural History. 2018. Yale University Press. Hardbound: 288 pages. Price: $40.00 U.S.
PUBLISHER'S SUMMARY: A lavishly illustrated celebration of each of the world’s sixty-eight currently recognized eagle species in all their magnificence and beguiling diversity.
Eagles hold a unique allure among birds for their combination of power, grace, and predatory prowess. Captivating the human imagination, these raptors have symbolized pride, freedom, and independence of spirit since humankind’s earliest times. This book, unlike any previous volume, encompasses each of the world’s sixty-eight currently recognized eagle species, from the huge Steller’s Sea Eagle that soars above Japan’s winter ice floes to the diminutive Little Eagle that hunts over the Australian outback. Mike Unwin’s vivid and authoritative descriptions combined with stunning photographs taken or curated by David Tipling deliver a fascinating and awe-inspiring volume.
Featuring chapters organized by habitat, the book investigates the lifestyle and unique adaptations of each eagle species, as well as the significance of eagles in world cultures and the threats they face from humans. A gorgeous appreciation of eagles, this book will dazzle both eye and imagination.
RECOMMENDATION: A well illustrated introduction to these species.


Posted by Birdbooker at 1:20 PM No comments: 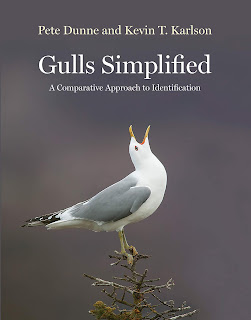 1) Dunne, Pete and Kevin Karlson. Gulls Simplified: A Comparative Approach to Identification. 2018. Princeton University Press. Paperback: 208 pages. Price: $24.95 U.S.
PUBLISHER'S SUMMARY: This unique photographic field guide to North America’s gulls provides a comparative approach to identification that concentrates on the size, structure, and basic plumage features of gulls―gone are the often-confusing array of plumage details found in traditional guides.
Featuring hundreds of color photos throughout, Gulls Simplified illustrates the variations of gull plumages for a variety of ages, giving readers strong visual reference points for each species. Extensive captions accompany the photos, which include comparative photo arrays, digitized photo arrays for each age group, and numerous images of each species―a wealth of visual information at your fingertips. This one-of-a-kind guide includes detailed species accounts and a distribution map for each gull.
An essential field companion for North American birders, Gulls Simplified reduces the confusion commonly associated with gull identification, offering a more user-friendly way of observing these marvelous birds.
RECOMMENDATION: A must have for all Larophile wannabes! 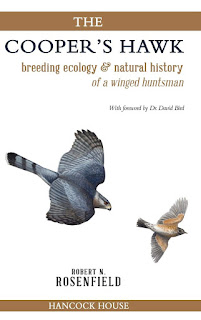 2) Rosenfield, Robert N.. The Cooper's Hawk: Breeding Ecology & Natural History of a Winged Huntsman. 2018. Hancock House. Paperback: 163 pages. Price: $34.95 U.S. (via publisher's website).
PUBLISHER'S SUMMARY: The Cooper's Hawk presents the general reader and professional biologists interested in birds and nature, with an authoritative account of the breeding biology of the what is perhaps the most abundant, backyard breeding raptor in North America. This urban status exists despite cross-generational human persecution through shooting of individuals and indirect felling of forests, their apparent preferred nesting habitat. Using conversational prose, the natural history of the bird's diet, including bird feeder use and disease concerns, courtship behavior, and the ecological themes of breeding density, reproductive success, and adult survivorship are described.
There too is a focus on how and why fieldwork is conducted on this ubiquitous city dweller who preys mostly on birds, or 'urban fast food.' How urban birds may differ from their rural counterparts is addressed, and especially highlighted is the novel aspect of reproductive deceit in this red-eyed, blue-backed predator, as, unlike all other birds of prey studied to date, it is highly promiscuous. The text is complemented with original art and especially crisp photographs that demonstrate this bird's natural history.
RECOMMENDATION: A must have for those with a serious interest in Cooper's Hawks.

Posted by Birdbooker at 2:59 PM No comments: