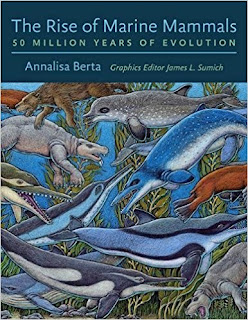 Focusing on evolution and paleobiology, Berta provides an overview of marine mammal species diversity, enhanced with gorgeous life restorations by Carl Buell, Robert Boessenecker, William Stout, and Ray Troll and extensive line drawings by graphics editor James L. Sumich. The book also considers ongoing conservation challenges, demonstrating how the fossil record of adaptation in response to past environmental shifts may illuminate the way that marine mammals respond to global climate change. This invaluable evolutionary framework is essential for helping us understand how best to protect and conserve today’s polar bears, whales, dolphins, seals, and fellow warm-blooded ocean dwellers.
The Rise of Marine Mammals also describes exciting breakthroughs that rely on new techniques of study, including 3-D imaging, and molecular, finite element, and morphometric analyses, which have enhanced scientists’ understanding of everything from the anatomy of fetal whales to the genes behind limb loss in cetaceans. Mammalogists, paleontologists, and marine scientists will find Berta’s insights absorbing, while developmental and molecular biologists, geneticists, and ecologists exploring integrative research approaches will benefit from her fresh perspective.
RECOMMENDATION: For those with a serious interest in marine mammal evolution.

Posted by Birdbooker at 3:01 PM No comments: 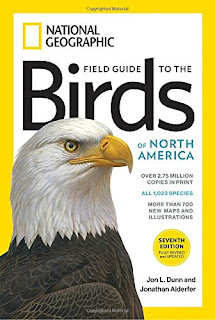 1) Dunn, Jon L. and Jonathan Alderfer. National Geographic Field Guide to the Birds of North America, 7th Edition. 2017. National Geographic. Paperback: 591 pages. Price: $29.99 U.S.
PUBLISHER'S SUMMARY: This fully revised edition of the best-selling North American bird field guide is the most up-to-date guide on the market. Perfect for beginning to advanced birders, it is the only book organized to match the latest American Ornithological Society taxonomy.
With more than 2.75 million copies in print, this perennial bestseller is the most frequently updated of all North American bird field guides. Filled with hand-painted illustrations from top nature artists (including the ever-popular hummingbird), this latest edition is poised to become an instant must-have for every serious birder in the United States and Canada. The 7th edition includes 37 new species for a total of 1,023 species; 16 new pages allow for 250 fresh illustrations; 80 new maps; and 350 map revisions. With taxonomy revised to reflect the radical new American Ornithological Society taxonomy established in 2016, the addition of standardized banding codes, and text completely vetted by birding experts, this new edition will top of the list of birding field guides for years to come.
RECOMMENDATION: This edition was updated through December 2016. Of all the new artwork, the hummingbird plates are the most revised (all new except for Lucifer Hummingbird). If you own other editions of this book, you will want this one! 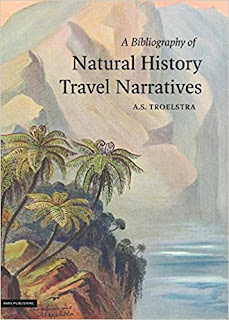 1) Troelstra, A.S.. Bibliography of Natural History Travel Narratives. 2016. KNNV Publishing. Hardbound: 481 pages. Price: $259.00 U.S.
PUBLISHER'S SUMMARY: A.S.Troelstra's fine bibliography is an outstanding and ground-breaking work. He has provided the academic world with a long-needed bibliographical record of human endeavour in the field of the natural sciences. The travel narratives listed here encompass all aspects of the natural world in every part of the globe, but are especially concerned with its fauna, flora and fossil remains. Such eyewitness accounts have always fascinated their readers, but they were never written solely for entertainment: fragmentary though they often are, these narratives of travel and exploration are of immense importance for our scientific understanding of life on earth, providing us with a window on an ever changing, and often vanishing, natural world. Without such records of the past we could not track, document or understand the significance of changes that are so important for the study of zoogeography. With this book Troelstra gives us a superb overview of natural history travel narratives. The well over four thousand detailed entries, ranging over four centuries and all major western European languages, are drawn from a wide range of sources and include both printed books and periodical contributions. While no subject bibliography by a single author can attain absolute completeness, Troelstra's work is comprehensive to a truly remarkable degree. The entries are arranged alphabetically by author and chronologically, by the year of first publication, under the author's name. A brief biography, with the scope and range of their work, is given for each author; every title is set in context, the contents - including illustrations - are described and all known editions and translations are cited. In addition, there is a geographical index that cross refers between authors and the regions visited, and a full list of the bibliographical and biographical sources used in compiling the bibliography.
RECOMMENDATION: For those with a serious interest in natural history travel literature.

Posted by Birdbooker at 3:22 PM No comments: 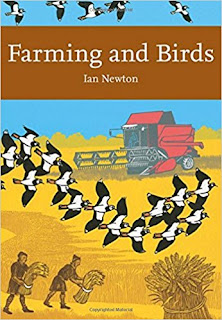 1) Newton, Ian. Farming and Birds (Collins New Naturalist Library). 2017. William Collins. Paperback: 628 pages. Price: $31.88 U.S.
PUBLISHER'S SUMMARY: Given the underlying topography, the scenery over most of Britain has been created largely by human activities. Over the centuries, landscapes have been continually modified as human needs and desires have changed. Each major change in land use has brought changes to the native plants and animals, continually altering the distribution and abundance of species. This is apparent from the changes in vegetation and animal populations that were documented in historical times, but even more so in those that have occurred since the Second World War. More than seventy per cent of Britain's land surface is currently used for crop or livestock production, and in recent decades farming has experienced a major revolution. Not only has it become more thoroughly mechanised, it has also become heavily dependent on synthetic fertilisers and pesticides, and increasingly large-scale in its operation. These changes have brought crop yields and livestock production to levels previously considered unattainable. However, such high yields have been achieved only at huge financial and environmental costs. One of the most conspicuous, and best documented, consequences of modern agriculture has been a massive loss of wildlife, including birds. In this timely addition to the New Naturalist Library, Ian Newton discusses the changes that have occurred in British agriculture over the past seventy years, and the effects they have had on bird populations. He explains how different farming procedures have affected birds and other wildlife, and how an understanding of the processes involved could help in future conservation.
RECOMMENDATION: For those with an interest in British avian ecology and/or collect the New Naturalist series.

Posted by Birdbooker at 3:47 PM No comments: 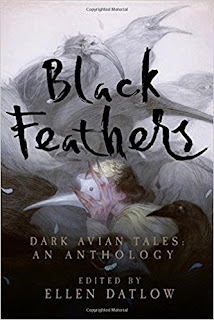 1) Datlow, Ellen (editor). Black Feathers: Dark Avian Tales: An Anthology. 2017. Pegasus. Hardbound: 308 pages. Price: $25.95 U.S.
PUBLISHER'S SUMMARY: A dazzling anthology of avian-themed fiction guaranteed to frighten and delight, edited by one of the most acclaimed horror anthologists in the genre.
Birds are usually loved for their beauty and their song. They symbolize freedom, eternal life, the soul.
There’s definitely a dark side to the avian. Birds of prey sometimes kill other birds (the shrike), destroy other birds’ eggs (blue jays), and even have been known to kill small animals (the kea sometimes eats live lambs). And who isn’t disgusted by birds that eat the dead―vultures awaiting their next meal as the life blood flows from the dying. One of our greatest fears is of being eaten by vultures before we’re quite dead.
Is it any wonder that with so many interpretations of the avian, that the contributors herein are eager to be transformed or influenced by them? Included in Black Feathers are those obsessed by birds of one type or another. Do they want to become birds or just take on some of the “power” of birds? The presence or absence of birds portends the future. A grieving widow takes comfort in her majestic winged neighbors, who enable her to cope with a predatory relative. An isolated society of women relies on a bird to tell their fortunes. A silent young girl and her pet bird might be the only hope a detective has of tracking down a serial killer in a tourist town. A chatty parrot makes illegal deals with the dying. A troubled man lives in isolation with only one friend for company―a jackdaw.
In each of these fictions, you will encounter the dark resonance between the human and avian. You see in yourself the savagery of a predator, the shrewd stalking of a hunter, and you are lured by birds that speak human language, that make beautiful music, that cypher numbers, and seem to have a moral center. You wade into this feathered nightmare, and brave the horror of death, trading your safety and sanity for that which we all seek―the promise of flight.
RECOMMENDATION: For those that like their bird tales on the dark side!

Posted by Birdbooker at 4:07 PM No comments: