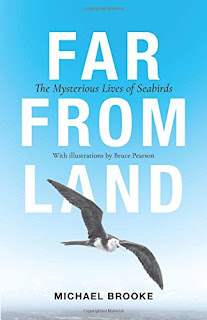 1) Brooke, Michael. Far from Land: The Mysterious Lives of Seabirds. 2018. Princeton University Press. Hardbound: 249 pages. Price: $29.95 U.S.
PUBLISHER'S SUMMARY: Seabirds evoke the spirit of the earth's wildest places. They spend large portions of their lives at sea, often far from land, and nest on beautiful and remote islands that humans rarely visit. Thanks to the development of increasingly sophisticated and miniaturized devices that can track their every movement and behavior, it is now possible to observe the mysterious lives of these remarkable creatures as never before. This beautifully illustrated book takes you on a breathtaking journey around the globe to reveal where these birds actually go when they roam the sea, the tactics they employ to traverse vast tracts of ocean, the strategies they use to evade threats, and more.
Michael Brooke has visited every corner of the world in his lifelong pursuit of seabirds. Here, he draws on his own experiences and insights as well as the latest cutting-edge science to shed light on the elusive seafaring lives of albatrosses, frigatebirds, cormorants, and other ocean wanderers. Where do puffins go in the winter? How deep do penguins dive? From how far away can an albatross spot a fishing vessel worth following for its next meal? Brooke addresses these and other questions in this delightful book. Along the way, he reveals that seabirds are not the aimless wind-tossed creatures they may appear to be and explains the observational innovations that are driving this exciting area of research.
Featuring illustrations by renowned artist Bruce Pearson and packed with intriguing facts, Far from Land provides an extraordinary up-close look at the activities of seabirds.
RECOMMENDATION: For those with an interest in oceanic birds.
Posted by Birdbooker at 3:46 PM 1 comment: 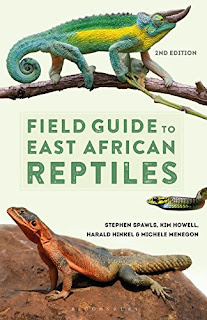 1) Spawls, Steve et al.. Field Guide to East African Reptiles (2nd Edition). 2018. Bloomsbury. Paperback: 624 pages. Price: $50.00 U.S.
PUBLISHER'S SUMMARY: Field Guide to the Reptiles of East Africa remains the definitive work on this subject and is the only comprehensive guide to the extensive and diverse reptile fauna of Kenya, Tanzania, Uganda, Rwanda, and Burundi. The second edition has been revised and updated to account for several significant discoveries made since the publication of the first book.

The detailed introduction is followed by individual accounts of all the chelonians, lizards, worm-lizards, crocodiles, and snakes of the region. Each photographically illustrated account describes the biology, ecology, habits, and habitat of a species, and also includes a distribution map.
The new paperback format, as well as the revised text and all new photographs, make this edition the only single-source, practical field guide to east African reptiles.
RECOMMENDATION: A must have for those with an interest in the reptiles of the region. 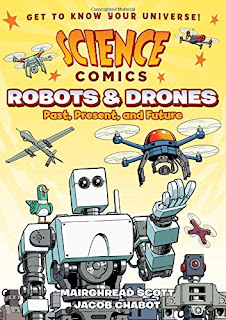 2) Scott, Mairghread and Jacob Chabot. Science Comics: Robots and Drones: Past, Present, and Future. 2018. First Second. Paperback: 121 pages. Price: $12.99 U.S.
PUBLISHER'S SUMMARY: In factories! In the sky! In your cars and phones! In your own home! Robots are everywhere! And they have been for a lot longer than you might realize.

From tea-serving robots in feudal Japan to modern rovers exploring Mars, robots have been humanity's partners, helpers, and protectors for centuries! Join one of the world's earliest robots, a mechanical bird named Pouli, as he explores where robots came from, how they work, and where they’re going in this informative and hilarious new book! Ever dreamt of building your own best friend? It might be easier than you think!
Every volume of Science Comics offers a complete introduction to a particular topic―dinosaurs, coral reefs, the solar system, volcanoes, bats, flying machines, and more. These gorgeously illustrated graphic novels offer wildly entertaining views of their subjects. Whether you're a fourth grader doing a natural science unit at school or a thirty year old with a secret passion for airplanes, these books are for you!
RECOMMENDATION: For ages: 9-13.


Posted by Birdbooker at 1:04 PM No comments: 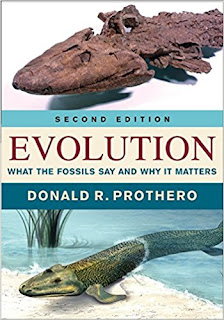 1) Prothero, Donald R.. Evolution: What the Fossils Say and Why It Matters (Second Edition). 2017. Columbia University Press. Hardbound: 427 pages. Price: $35.00 U.S.
PUBLISHER'S SUMMARY: Donald R. Prothero’s Evolution is an entertaining and rigorous history of the transitional forms and series found in the fossil record. Its engaging narrative of scientific discovery and well-grounded analysis has led to the book’s widespread adoption in courses that teach the nature and value of fossil evidence for evolution. Evolution tackles systematics and cladistics, rock dating, neo-Darwinism, and macroevolution. It includes extensive coverage of the primordial soup, invertebrate transitions, the development of the backbone, the reign of the dinosaurs, and the transformation from early hominid to modern human. The book also details the many alleged “missing links” in the fossil record, including some of the most recent discoveries that flesh out the fossil timeline and the evolutionary process.
In this second edition, Prothero describes new transitional fossils from various periods, vividly depicting such bizarre creatures as the Odontochelys, or the “turtle on the half shell”; fossil snakes with legs; and the “Frogamander,” a new example of amphibian transition. Prothero’s discussion of intelligent design arguments includes more historical examples and careful examination of the “experiments” and observations that are exploited by creationists seeking to undermine sound science education. With new perspectives, Prothero reframes creationism as a case study in denialism and pseudoscience rather than a field with its own intellectual dynamism. The first edition was hailed as an exemplary exploration of the fossil evidence for evolution, and this second edition will be welcome in the libraries of scholars, teachers, and general readers who stand up for sound science in this post-truth era.
RECOMMENDATION: If you liked the first edition, you will want the second edition!
Posted by Birdbooker at 3:32 PM No comments: 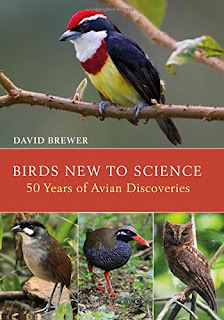 This book documents all of these remarkable discoveries made since 1960, from Barau's Petrel onwards, covering around 300 species. It fills an important gap in the ornithological literature.
Written in an engaging style, Birds New to Science provides a rich reference to an era of adventure in ornithology. Each species account discusses the story of the discovery, with photographs of the birds where available, along with a discussion of what is known about the species' biology, habitat, and distribution, with a strong conservation message--most of the species in the book are either vulnerable or endangered.
RECOMMENDATION: For those with an interest in ornithological history and/or avian conservation.
Posted by Birdbooker at 12:54 PM No comments: 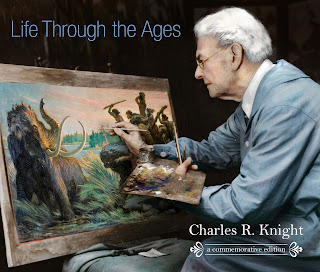 1) Knight, Charles R.. Life Through the Ages, A Commemorative Edition. 2017 (2001). Indiana University Press. Paperback: 67 pages. Price: $18.00 U.S.
PUBLISHER'S SUMMARY: First published in 1946, Charles R. Knight’s Life through the Ages was for many a beloved first look at the strange animals of the prehistoric past. For much of the 20th century, Knight’s reconstructions were the key resource for popular images of ancient life. His paintings and drawings were displayed as part of museum exhibits, notably at the American Museum of Natural History in New York and the Field Museum in Chicago, were used as illustrations in numerous books and magazine articles, and even influenced movie portrayals of dinosaurs and other prehistoric beasts. Knight’s work was highly regarded both for its artistic skill and for its scientific accuracy, closely based as it was on the knowledge of its time. Although new discoveries and ongoing research have changed the view of many of the animals depicted by Knight, his work remains valuable and is still treasured by new generations of scientists and paleoartists.
RECOMMENDATION: For fans of Charles R. Knight’s work.
Posted by Birdbooker at 3:26 PM No comments: