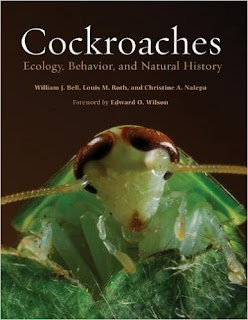 1) Bell, William J. et al.. Cockroaches: Ecology, Behavior, and Natural History. 2007 (2016). Johns Hopkins University Press. Paperback: 230 pages. Price: $89.95 U.S.
PUBLISHER'S SUMMARY: The cockroach is truly an evolutionary wonder. This definitive volume provides a complete overview of suborder Blattaria, highlighting the diversity of these amazing insects in their natural environments. Beginning with a foreword by Edward O. Wilson, the book explores the fascinating natural history and behavior of cockroaches, describing their various colors, sizes, and shapes, as well as how they move on land, in water, and through the air. In addition to habitat use, diet, reproduction, and behavior, Cockroaches covers aspects of cockroach biology, such as the relationship between cockroaches and microbes, termites as social cockroaches, and the ecological impact of the suborder. With over 100 illustrations, an expanded glossary, and an invaluable set of references, this work is destined to become the classic book on the Blattaria. Students and research entomologists can mine each chapter for new ideas, new perspectives, and new directions for future study.
RECOMMENDATION: For those with a serious interest in cockroaches. 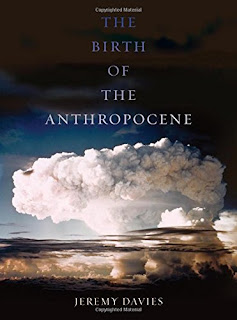 2) Davies, Jeremy. The Birth of the Anthropocene. 2016. University of California Press. Hardbound: 234 pages. Price: $29.95 U.S.
PUBLISHER'S SUMMARY: The world faces an environmental crisis unprecedented in human history. Carbon dioxide levels have reached heights not seen for three million years, and the greatest mass extinction since the time of the dinosaurs appears to be underway. Such far-reaching changes suggest something remarkable: the beginning of a new geological epoch. It has been called the Anthropocene. The Birth of the Anthropocene shows how this epochal transformation puts the deep history of the planet at the heart of contemporary environmental politics. By opening a window onto geological time, the idea of the Anthropocene changes our understanding of present-day environmental destruction and injustice. Linking new developments in earth science to the insights of world historians, Jeremy Davies shows that as the Anthropocene epoch begins, politics and geology have become inextricably entwined.
RECOMMENDATION: A readable overview on the subject.
Posted by Birdbooker at 4:55 PM No comments: 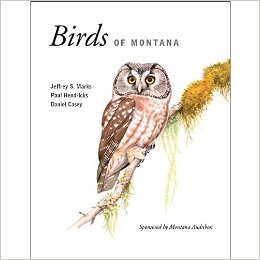 1) Marks, Jeffrey S.,  Paul Hendricks, and Daniel Casey. Birds of Montana. 2016. Buteo Books. Hardbound: 657 pages. Price: $75.00 U.S.
PUBLISHER'S SUMMARY: Birds of Montana is the first comprehensive reference on the state's birds since Saunders published A Distributional List of the Birds of Montana in 1921, and it is the only work that provides a thorough review of the status, distribution, relative abundance, ecology, and conservation of the 433 bird species that have been found in the state since Montana entered the Union in 1889. Introductory chapters describe Montana's geography, topography, and habitat types; thoroughly review the vast historical literature on the state's birds beginning with the journals of Lewis and Clark; and summarize conservation issues and actions that will affect the health of bird populations for decades to come. Detailed species accounts provide a range map for selected species and summarize information under the subheadings Status and Occurrence, Habitat, Conservation, Historical Notes, Contemporary Work, and Banded Birds. A modern account of the status, biology, and conservation of Montana's birds is long overdue. Birds of Montana fills that need and will be a valuable reference that will increase the public's knowledge of the state's birds, enhance awareness of conservation issues affecting birds and their habitats, and establish a benchmark against which changes in Montana's bird populations can be measured in the future. 155 color range maps, 73 original illustrations of individual species, and 16 full-color habitat photos.
RECOMMENDATION: A MUST have for those with an interest in the birds of Montana.
Posted by Birdbooker at 8:24 PM No comments: 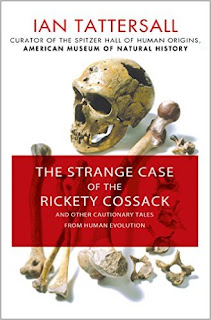 1) Tattersall, Ian. The Strange Case of the Rickety Cossack: and Other Cautionary Tales from Human Evolution. 2015. Palgrave. Hardbound: 244 pages. Price: $27.00 U.S.
PUBLISHER'S SUMMARY: In his new book The Strange Case of the Rickety Cossack, human paleoanthropologist Ian Tattersall argues that a long tradition of "human exceptionalism" in paleoanthropology has distorted the picture of human evolution. Drawing partly on his own career―from young scientist in awe of his elders to crotchety elder statesman―Tattersall offers an idiosyncratic look at the competitive world of paleoanthropology, beginning with Charles Darwin 150 years ago, and continuing through the Leakey dynasty in Africa, and concluding with the latest astonishing findings in the Caucasus.

The book's title refers to the 1856 discovery of a clearly very old skull cap in Germany's Neander Valley. The possessor had a brain as large as a modern human, but a heavy low braincase with a prominent brow ridge. Scientists tried hard to explain away the inconvenient possibility that this was not actually our direct relative. One extreme interpretation suggested that the preserved leg bones were curved by both rickets, and by a life on horseback. The pain of the unfortunate individual's affliction had caused him to chronically furrow his brow in agony, leading to the excessive development of bone above the eye sockets.
The subsequent history of human evolutionary studies is full of similarly fanciful interpretations. With tact and humor, Tattersall concludes that we are not the perfected products of natural processes, but instead the result of substantial doses of random happenstance.
RECOMMENDATION: For those with an interest in paleoanthropology.
Posted by Birdbooker at 4:58 PM No comments: 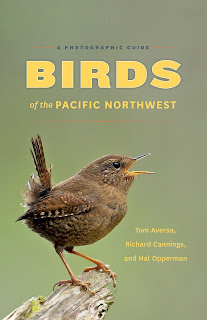 Posted by Birdbooker at 5:03 PM No comments: 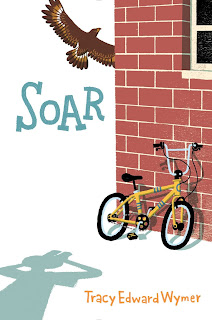 1) Wymer, Tracy Edward. Soar. 2016. Aladdin. Hardbound: 288 pages. Price: $17.99 U.S.
PUBLISHER'S SUMMARY: Eddie learned everything there is to know about birding from his dad, including the legend of the Golden Eagle, which Dad claimed he saw once down near Miss Dorothy's pond. According to his dad, the Golden Eagle had wings wider than a creek and talons the size of bulldozer claws. But when Eddie was in sixth grade, Dad "flew away" for good, leaving Eddie on his own to await the return of the elusive raptor.
Now Eddie is starting seventh grade and trying to impress Gabriella, the new girl in town. The annual seventh grade Science Symposium (which Dad famously won) is looming, and Eddie is determined to claim the blue ribbon for himself. With Mr. Dover, the science teacher who was Dad's birding rival, seemingly against him, and with Mouton, the class bully, making his life miserable on all fronts, Eddie is determined to overcome everything and live up to Dad's memory. Can Eddie soar and make his dream take flight?
RECOMMENDATION: For ages 8 - 12 years.
Posted by Birdbooker at 4:29 PM No comments: 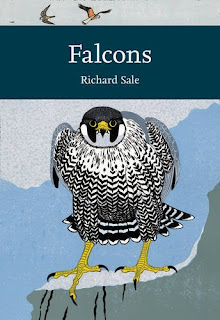 In a much-anticipated volume on one of Britain’s most fascinating group of birds, Richard Sale draws on a wealth of experience and research, providing a comprehensive natural history of the four British breeding falcons. The book takes each of the four breeding species in turn (Kestrel, Merlin, Hobby and Peregrine Falcon), exploring its form, habitat, breeding biology and status, along with a chapter on the hunting techniques of each species.
RECOMMENDATION: A must have for anyone with an interest in British falcons or collects the New Naturalist titles.
Posted by Birdbooker at 2:23 PM No comments: 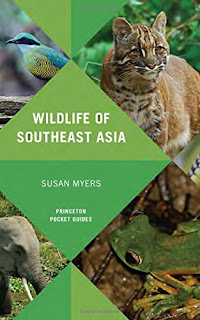 1) Myers, Susan. Wildlife of Southeast Asia. 2016. Princeton University Press. Paperback: 256 pages. Price: $22.95 U.S.
PUBLISHER'S SUMMARY: This handy photographic guide offers a stunning look at the wildlife of Southeast Asia, which includes Burma, Thailand, Laos, Cambodia, Vietnam, West Malaysia, and Singapore. Accessible text and more than 500 color photographs help readers to learn about and identify the most common species found in the region, particularly the mammals, birds, reptiles, amphibians, and insects that visitors will most likely encounter. Detailed photos are accompanied on facing pages by succinct species accounts highlighting key identification features, status, and distribution. The book's brief introduction offers readers useful information on major wildlife sites as well as practical advice on making the most of a wildlife-watching trip.
Wildlife of Southeast Asia is the essential resource for visitors and residents interested in the fauna of this fascinating area of the world.
RECOMMENDATION: A useful introduction to the wildlife of the region.
Posted by Birdbooker at 4:58 PM No comments: 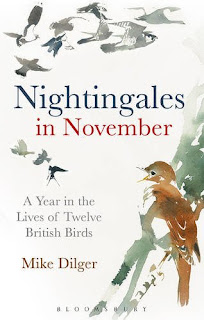 1) Dilger, Mike. Nightingales in November: A Year in the Lives of Twelve British Birds. 2016. Bloomsbury. Hardbound: 368 pages. Price: $30.00 U.S.
PUBLISHER'S SUMMARY: Have you ever wondered what British birds get up to when they're not pinching peanuts, pilfering pyracantha berries, or nesting under the eaves? The One Show's natural history star, Mike Dilger, offers answers in Nightingales in November.

This beautifully illustrated almanac tells the different stories of twelve well-known birds we deign to call "British." Through a lyrical narrative, Nightingales in November showcases amazing avian facts gleaned over decades by birdwatchers, ringers, and nest and migration recorders. The perfect "dip-into" book, any inquiring naturalist will be able to find out such facts as where British breeding swallows spend Christmas Day, when to look out for juvenile tawny owls, or when to listen for nightingales.
By using a combination of cutting-edge satellite technology and millions of ringing records, Nightingales in November reveals the mysteries of migration, tracking the regular movements of, for example, cuckoos for the eight months they're not in the UK, or divulging why not all robins are the "stay-at-home" territorial types they were once imagined to be.
Illustrated throughout by Christina Holvey, the birds featured include a rich mix of resident birds, summer visitors, winter visitors, and passage migrants. Nightingales in November is a great read for both novice and avid birders alike.
RECOMMENDATION: A readable account of British birds.
Posted by Birdbooker at 4:54 PM No comments: