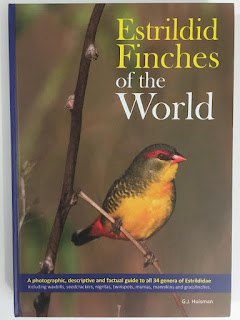 PUBLISHER’S SUMMARY: Estrildid Finches of the World was written over a period of nine years and is intended for a wide audience, not only bird lovers and bird watchers, but also ornithologists and other scientists. Estrildid finches are among the most fascinating bird families of the Old World with surprising and special characteristics. The family of Estrildidae comprises 34 genera with 145 species and 239 subspecies, each having its own quirks.

All 145 species and their subspecies are described in detail and the unique distribution maps present the spread of all subspecies in different colours. The descriptions of the species are supported by beautiful photographs of the birds in their natural habitats.

These photos represent the work of close to 300 photographers from 40 countries around the world, whose achievements were vitally important to this huge project. Not only did they afford the author permission to use their photos, but they also provided valuable information on the species directly through their first-hand field experience. In fact, some species have never been illustrated photographically before. In addition, the author was very fortunate in that several renowned universities, such as Cambridge and Yale, were extremely helpful.

The reader will also be treated to photos of nestlings at different stages of their development, which were taken by bird breeders so as not to unnecessarily disturb the breeding birds in their natural habitats. Estrildid Finches of the World depicts the largest number of mouth markings ever published, with 111 species being illustrated. Original photos show nestling mimicry of estrildid finches and their parasitic whydahs and indigobirds, making this a fascinating resource for evolutionary biologists.

RECOMMENDATION: A MUST have for anyone with an interest in Estrildid Finches and/or collect bird family monographs! The book can be ordered here. 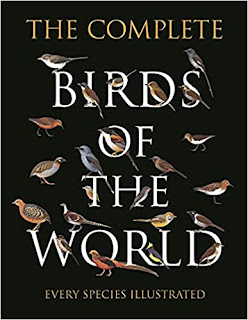 PUBLISHER’S SUMMARY: The ultimate reference book for birdwatchers and bird lovers―the first single-volume book to illustrate all of the world’s bird species.

This is a book like no other―the only truly comprehensive, one-volume illustrated guide to all of the world’s birds, covering the complete International Ornithological Congress World Bird List. Featuring more than 300 stunning large-format, full-color plates, this accessible and authoritative encyclopedic reference presents incredibly detailed, accurate, and beautiful paintings of more than 10,700 species by some of the world’s best bird artists, led by the legendary Norman Arlott and Ber van Perlo. In addition, The Complete Birds of the World provides detailed but concise identification information about each species on facing pages―including facts about voice, habitat, and geographic distribution. The result is a visual and verbal feast that captures the astonishing variety of bird life around the planet―and that will be cherished by any birder.

RECOMMENDATION: Of the three "Illustrated Checklist to the Birds of the World" type books, Westoll's 1998 book is out-of-print and out-of-date. The two in print books are this one and Lynx's 2020 title. This book is smaller, has more crowded plates, and minimal text vs. QR codes of the Lynx volume. I prefer the Lynx book over this one. 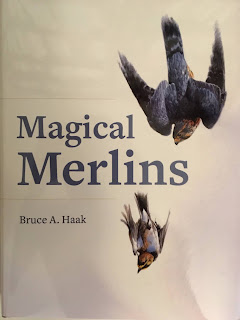 SUMMARY: This book is a detailed study of the biology of the Merlin (Falco columbarius), a small falcon species, found in North America and Eurasia. Most of the research in this book is from the Pacific Northwest region of North America.  This work has four co-authors, six painters, and twelve photographers. It contains thirty-five illustrations (paintings, maps, plates) and sixty-six color photos. Birders will find chapter eight (Plumages of North American Merlins), written and illustrated by N. John Schmitt, the most useful.

RECOMMENDATION: If you're a fan of Merlins or into falcons in general you will want this book! The book can be ordered here. 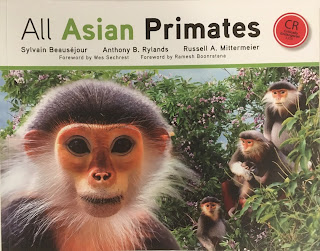 PUBLISHER’S SUMMARY: This book features the most beautiful images of the Asian apes, monkeys and prosimians, including the rarest, photographed by more than 200 naturalists, professional and amateur photographers, primatologists and wildlife organizations.

This collection portrays 131 species and, including the currently recognized subspecies of 26 of them, 193 Asian primates overall. Just for the sake of completeness, also included is the Barbary macaque of northern Africa, the only living member of the genus from outside of Asia. Other than the Barbary macaque and the Hamadryas baboon, all are endemic to South, Southeast and East Asia. Coverage is also provided for some 19 described subspecies that today are not considered valid (the scientific names attributed to them are given in parentheses), along with the different pelage colour forms of nine of the species and subspecies.

A distribution map, a short introductory text, and a listing of the species and subspecies introduce each chapter devoted to the five Asian primate families, their subfamilies and genera. A photo montage shows a close-up of the face and, behind it, when possible, males, females and young in the habitat, for each species and subspecies. On the opposite page, each taxon is accompanied by its scientific name, a common name in English and French, and its Red List status. There is a map and a description of their geographic range, along with brief but fully referenced notes on their taxonomy (nomenclatural history), and a summary of the threats each face and their conservation measures, including notable protected areas where they mainly occur. There is even a QR code that users can access for details of the taxon on the IUCN Red List website.

A final section lists the Asian primate species and subspecies in each of the 22 countries where they occur.

All Asian Primates will engage its readers towards the goal of protecting and restoring a remarkable and vital element of Asia's rich biodiversity. It presents us with the full range of Asian primates, so many of which are today threatened with extinction. It is built on the work of countless scientists, conservationists, and wildlife photographers, providing us with information to learn and understand more about each of the 193 primate species and subspecies in Asia that have been named and described, and their biogeography, which has been uncovered through centuries of research and exploration. The astonishing photos bring to life every species and subspecies, generating hope and inspiration to save our closest cousins.

RECOMMENDATION: A must have for anyone with an interest in Asian primates. 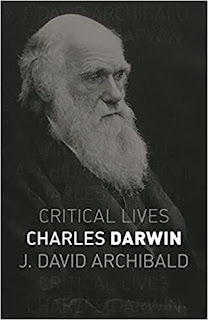 PUBLISHER’S SUMMARY: In 1859 Charles Darwin published On the Origin of Species. With this bedrock of biology books, Darwin carved a new origin-story for all life: evolution rather than creation. But this single book is not the whole story. In this new biography, J. David Archibald describes and analyzes Darwin’s prodigious body of work and complex relationships with colleagues, as well as his equally productive home life—he lived with his wife and seven surviving children in the bustling environs of Down House, south of London. There, among his family and friends, Darwin continued to experiment and write many more books on orchids, sex, emotions, and earthworms until his death in 1882, when he was honored with burial at Westminster Abbey. This is a fresh, up-to-date account of the life and work of a most remarkable man.

RECOMMENDATION: A readable overview on the life of Charles Darwin.