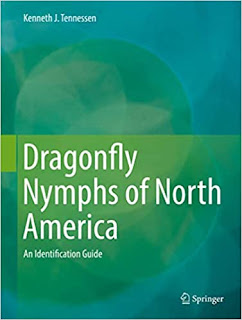 PUBLISHER’S SUMMARY:  This monograph is the first of its kind devoted entirely to the dragonfly nymphs of North America north of Mexico, the focus being accurate identification of the 330 species of Anisoptera that occur in the region. Nymphal external morphology is described and illustrated in detail, and all terms needed to navigate the dichotomous keys are defined. Species are tabulated with references that provide the most detailed, accurate descriptions for each; species that are inadequately described are so indicated. The key separating the seven families in the region contains several new characters. The families are then covered separately: Aeshnidae (13 genera), Gomphidae (17 genera), Petaluridae (2 genera), Cordulegastridae (2 genera), Macromiidae (2 genera), Corduliidae (7 genera), and Libellulidae (29 genera). Each family is further characterized, followed by a generic key. A drawing of the habitus and diagnostic details for each genus are provided, along with additional diagnostic remarks and notes on habitat and life cycle; for each genus, a map shows its geographic distribution in North America. Full-grown nymphs of all known species of each genus are keyed and diagnosed; characters that apply to earlier instars are noted. Morphological variation in character states was analyzed in order to assess the reliability of previously utilized characters and to discover new characters. Most of the characters used to distinguish all levels of taxa are illustrated; a total of 702 figures, comprising 1,800 original drawings, along with selected photographs where necessary for clarity, accompany the keys. Measurements of total length, head width, and other variables for each species are provided in tables.

Difficulties with past keys and descriptions, including errors, omissions and other shortcomings, are addressed. The importance of nymph characters in helping solve generic and specific distinctions and their role in phylogenetic studies is emphasized. Methods for collecting, rearing, and preserving dragonfly nymphs and exuviae are presented. The final chapter discusses research opportunities on North American Anisoptera nymphs, including taxonomic needs, studies on structure and function, life history and microhabitat, water quality indices and conservation efforts. The habitus drawings of all genera are arranged according to family in five plates (Appendix I); although the book is intended as a lab manual, these plates conveniently allow for comparison based on nymph shape making field identification to genus possible in many cases. Appendix II contains a brief history of dragonfly nymph studies in North America. A glossary and an index to scientific names are included.

RECOMMENDATION: A MUST have for anyone with a serious interest in North American dragonflies! 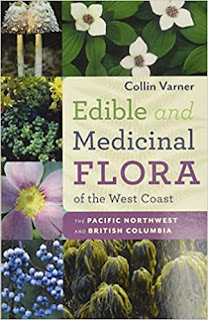 PUBLISHER’S SUMMARY: The lush Pacific Northwest coast is home to a multitude of edible and medicinal flora, from marine plants to be harvested in tide pools to edible mushrooms ready to be gleaned from the forest floor. This compact, full-color forager's guide offers clear photography, descriptions, safety tips, and traditional culinary and medicinal uses for wild-growing native and introduced species in the region, including:

• Big leaf maple―the source of a delicious West Coast maple syrup
• Yellow morel mushrooms―a favorite of foragers, but not to be confused with the poisonous false morel
• Sea asparagus―perfect in salad or with seafood
• Evening primrose―an introduced species used to treat a variety of ailments

Practical and user-friendly, Edible and Medicinal Flora of the West Coast is an indispensable guide for beginning and experienced foragers alike.

RECOMMENDATION: A must have for anyone with an interest in the flora of the region! 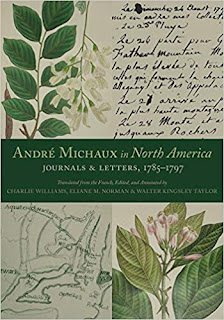 Known to today’s biologists primarily as the “Michx.” at the end of more than 700 plant names, André Michaux was an intrepid French naturalist. Under the directive of King Louis XVI, he was commissioned to search out and grow new, rare, and never-before-described plant species and ship them back to his homeland in order to improve French forestry, agriculture, and horticulture. He made major botanical discoveries and published them in his two landmark books, Histoire des chênes de l’Amérique (1801), a compendium of all oak species recognized from eastern North America, and Flora Boreali-Americana (1803), the first account of all plants known in eastern North America.

Straddling the fields of documentary editing, history of the early republic, history of science, botany, and American studies, André Michaux in North America: Journals and Letters, 1785–1797 is the first complete English edition of Michaux’s American journals. This copiously annotated translation includes important excerpts from his little-known correspondence as well as a substantial introduction situating Michaux and his work in the larger scientific context of the day.

To carry out his mission, Michaux traveled from the Bahamas to Hudson Bay and west to the Mississippi River on nine separate journeys, all indicated on a finely rendered, color-coded map in this volume. His writings detail the many hardships—debilitating disease, robberies, dangerous wild animals, even shipwreck—that Michaux endured on the North American frontier and on his return home. But they also convey the soaring joys of exploration in a new world where nature still reigned supreme, a paradise of plants never before known to Western science. The thrill of discovery drove Michaux ever onward, even ultimately to his untimely death in 1802 on the remote island of Madagascar.

RECOMMENDATION: A must have for anyone with a serious interest in the botanical history of North America! 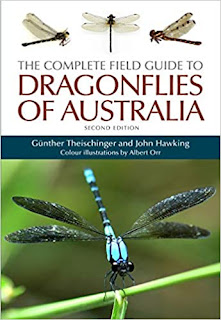 PUBLISHER’S SUMMARY: Dragonflies and damselflies are conspicuous insects: many are large and brightly colored. They are also valuable indicators of environmental well-being. A detailed knowledge of the dragonfly fauna is therefore an important basis for decisions about environmental protection and management.

This comprehensive guide to the Australian dragonfly fauna covers eight families of dragonflies and 10 families of damselflies, comprising the 113 genera and 333 species found in Australia. It has been updated with newly identified species and revised family names to reflect new world consensus systematics. Stunning full-color images and distribution maps are accompanied by identification keys for adults as well as larvae, which are often used as bait for freshwater fish.

This second edition of The Complete Field Guide to Dragonflies of Australia also includes illustrations by Albert Orr, one of the most renowned dragonfly illustrators. The extraordinary diversity of dragonflies will interest entomologists and amateur naturalists alike.

RECOMMENDATION: A must have for anyone with an interest in the dragonflies and damselflies of Australia. 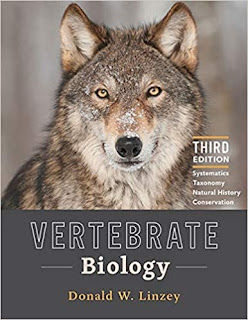 PUBLISHER’S SUMMARY: Covering crucial topics from morphology and behavior to ecology and zoogeography, Donald Linzey's popular textbook, Vertebrate Biology, has long been recognized as the most comprehensive and readable resource on vertebrates for students and educators. Thoroughly updated with the latest research, this new edition discusses taxa and topics such as:

For the first time, 32 pages of color images bring these fascinating organisms to life. In addition, 5 entirely new chapters have been added to the book, which cover:

Complete with review questions, updated references, appendixes, and a glossary of well over 300 terms, Vertebrate Biology is the ideal text for courses in zoology, vertebrate biology, vertebrate natural history, and general biology. Donald W. Linzey carefully builds theme upon theme, concept upon concept, as he walks students through a plethora of topics. Arranged logically to follow the most widely adopted course structure, this text will leave students with a full understanding of the unique structure, function, and living patterns of all vertebrates.

RECOMMENDATION: This textbook is best for undergraduate level courses. 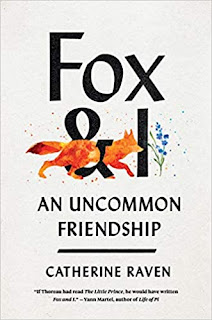 PUBLISHER’S SUMMARY: An unforgettable memoir about the friendship between a solitary woman and a wild fox.

When Catherine Raven finished her PhD in biology, she built herself a tiny cottage on an isolated plot of land in Montana. She was as emotionally isolated as she was physically, but she viewed the house as a way station, a temporary rest stop where she could gather her nerves and fill out applications for what she hoped would be a real job that would help her fit into society. In the meantime, she taught remotely and led field classes in nearby Yellowstone National Park. Then one day she realized that a mangy-looking fox was showing up on her property every afternoon at 4:15 p.m. She had never had a regular visitor before. How do you even talk to a fox? She brought out her camping chair, sat as close to him as she dared, and began reading to him from The Little Prince. Her scientific training had taught her not to anthropomorphize animals, yet as she grew to know him, his personality revealed itself and they became friends. From the fox, she learned the single most important thing about loneliness: we are never alone when we are connected to the natural world. Friends, however, cannot save each other from the uncontained forces of nature. Fox and I is a poignant and remarkable tale of friendship, growth, and coping with inevitable loss―and of how that loss can be transformed into meaning. It is both a timely tale of solitude and belonging as well as a timeless story of one woman whose immersion in the natural world will change the way we view our surroundings―each tree, weed, flower, stone, or fox.

RECOMMENDATION: Fans of natural history narratives will want this book! 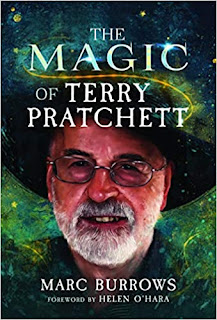 PUBLISHER’S SUMMARY: The first ever full biography of one of Britain’s best loved and most successful ever writers.

The Magic Of Terry Pratchett is the first full biography of Sir Terry Pratchett ever written. Sir Terry was Britain’s best-selling living author*, and before his death in 2015 had sold more than 85 million copies of his books worldwide. Best known for the Discworld series, his work has been translated into 37 languages, and performed as plays on every continent in the world, including Antarctica.

Journalist, comedian and Pratchett fan Marc Burrows delves into the back story of one of UK’s most enduring and beloved authors, from his childhood in the Chiltern Hills, to his time as a journalist, and the journey that would take him – via more than sixty best-selling books – to an OBE, a knighthood and national treasure status.

The Magic Of Terry Pratchett is the result of painstaking archival research alongside interviews with friends and contemporaries who knew the real man under the famous black hat, helping to piece together the full story of one of British literature’s most remarkable and beloved figures for the very first time.

* Now disqualified on both counts.

RECOMMENDATION: A must have for Terry Pratchett fans!