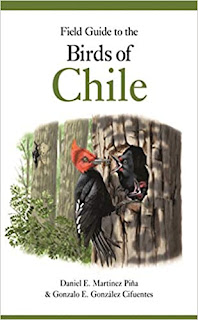 PUBLISHER’S SUMMARY: With its diverse range of habitats, Chile boasts a remarkable variety of breeding and visiting birds, from penguins to hummingbirds, making the country one of South America’s top birding destinations. From the Chilean Tinamou and Juan Fernandez Firecrown to the Magellanic woodpecker, this comprehensive and authoritative field guide covers every one of Chile’s 468 recorded species, including vagrants. All are illustrated in superb detail in 89 color plates, which feature every major plumage variation. Concise, facing-page species accounts describe key identification features, status, range, habitat, and voice, and accurate distribution maps are also provided for every species. The result is an essential field guide to the birds of this fascinating and beautiful country.

RECOMMENDATION: A must have for those birding Chile! 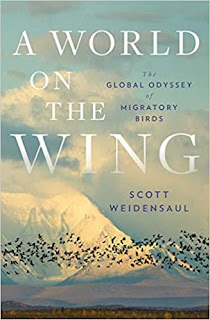 PUBLISHER’S SUMMARY: In the past two decades, our understanding of the navigational and physiological feats that enable birds to cross immense oceans, fly above the highest mountains, or remain in unbroken flight for months at a stretch has exploded. What we’ve learned of these key migrations―how billions of birds circumnavigate the globe, flying tens of thousands of miles between hemispheres on an annual basis―is nothing short of extraordinary.

Bird migration entails almost unfathomable endurance, like a sparrow-sized sandpiper that will fly nonstop from Canada to Venezuela―the equivalent of running 126 consecutive marathons without food, water, or rest―avoiding dehydration by "drinking" moisture from its own muscles and organs, while orienting itself using the earth’s magnetic field through a form of quantum entanglement that made Einstein queasy. Crossing the Pacific Ocean in nine days of nonstop flight, as some birds do, leaves little time for sleep, but migrants can put half their brains to sleep for a few seconds at a time, alternating sides―and their reaction time actually improves.

These and other revelations convey both the wonder of bird migration and its global sweep, from the mudflats of the Yellow Sea in China to the remote mountains of northeastern India to the dusty hills of southern Cyprus. This breathtaking work of nature writing from Pulitzer Prize finalist Scott Weidensaul also introduces readers to those scientists, researchers, and bird lovers trying to preserve global migratory patterns in the face of climate change and other environmental challenges.

Drawing on his own extensive fieldwork, in A World on the Wing Weidensaul unveils with dazzling prose the miracle of nature taking place over our heads. 16 pages of color photographs; 15 maps.

RECOMMENDATION: If you enjoyed the authors'  Living on the Wind, you should enjoy this book! 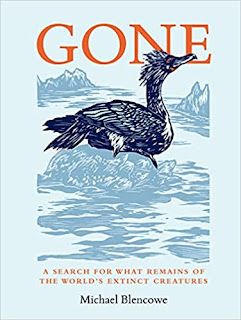 PUBLISHER’S SUMMARY: Dynamic naturalist Michael Blencowe has travelled the globe to uncover the fascinating backstories of eleven extinct animals, which he shares with charm and insight in Gone.

Inspired by his childhood obsession with extinct species, Blencowe takes us around the globe – from the forests of New Zealand to the ferries of Finland, from the urban sprawl of San Francisco to an inflatable crocodile on Brighton’s Widewater Lagoon. Spanning five centuries, from the last sighting of New Zealand’s Upland Moa to the 2012 death of the Pinta Island Giant Tortoise, Lonesome George, his memoir is peppered with the accounts of the hunters and naturalists of the past as well as revealing conversations with the custodians of these totemic animals today.

Featuring striking artworks that resurrect these forgotten creatures, each chapter focuses on a different animal, revealing insights into their unique characteristics and habitats; the history of their discovery and just how and when they came to be lost to us.

Blencowe inspects the only known remains of a Huia egg at Te Papa, New Zealand; views hundreds of specimens of deceased Galapagos tortoises and Xerces Blue butterflies in the California Academy of Sciences; and pays his respects to the only soft tissue remains of the Dodo in the world. Warm, wry and thought-provoking, Gone shows that while each extinction story is different, all can inform how we live in the future. Discover and learn from the stories of the:

A modern must-read for anyone interested in protecting our earth and its incredible wildlife, Gone is an evocative call to conserve what we have before it is lost forever.

RECOMMENDATION: Anyone with an interest in recently extinct species should read this book! 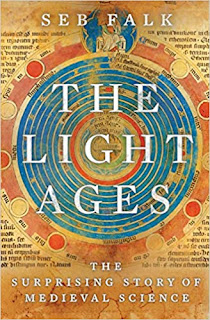 PUBLISHER’S SUMMARY: An illuminating guide to the scientific and technological achievements of the Middle Ages through the life of a crusading astronomer-monk.

Soaring Gothic cathedrals, violent crusades, the Black Death: these are the dramatic forces that shaped the medieval era. But the so-called Dark Ages also gave us the first universities, eyeglasses, and mechanical clocks. As medieval thinkers sought to understand the world around them, from the passing of the seasons to the stars in the sky, they came to develop a vibrant scientific culture.

In The Light Ages, Cambridge science historian Seb Falk takes us on a tour of medieval science through the eyes of one fourteenth-century monk, John of Westwyk. Born in a rural manor, educated in England’s grandest monastery, and then exiled to a clifftop priory, Westwyk was an intrepid crusader, inventor, and astrologer. From multiplying Roman numerals to navigating by the stars, curing disease, and telling time with an ancient astrolabe, we learn emerging science alongside Westwyk and travel with him through the length and breadth of England and beyond its shores. On our way, we encounter a remarkable cast of characters: the clock-building English abbot with leprosy, the French craftsman-turned-spy, and the Persian polymath who founded the world’s most advanced observatory.

The Light Ages offers a gripping story of the struggles and successes of an ordinary man in a precarious world and conjures a vivid picture of medieval life as we have never seen it before. An enlightening history that argues that these times weren’t so dark after all, The Light Ages shows how medieval ideas continue to color how we see the world today. 8 pages of color illustrations.

RECOMMENDATION: For anyone with an interest in the history of science.