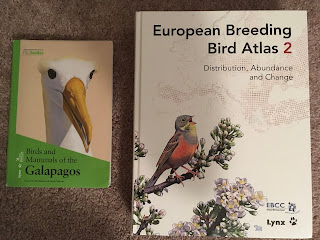 PUBLISHER’S SUMMARY: The Galapagos archipelago is one of the most famous destinations on Earth for lovers of natural history. Straddling the equator in the Pacific Ocean c. 1000 km west of Ecuador lies 'the world's natural laboratory' with its large radiations of mockingbirds and Darwin's finches. These remote islands of volcanic origin have been colonized by a remarkable and diverse wildlife, many of the animals being quite fearless of man. With 33 endemic bird species plus 12 endemic subspecies, and six endemic mammals, the islands are unsurprisingly popular with birders and general naturalists alike. This comprehensive field guide covers all of the birds and mammals known to occur, providing the latest insights on field identification and taxonomy for challenging groups such as pelagic birds, Darwin's finches, and cetaceans. The Galapagos is also known for its vagrants, which too are covered in detail, including several new records not published previously. Many hypothetical and potential species have been included in a separate section, to further promote exploration of these unique islands.

- Taxonomy follows the HBW and BirdLife International Illustrated Checklist of the Birds of the World and the Illustrated Checklist of the Mammals of the World.
- Detailed texts covering status, habitat and behaviour, age, sex and geographical variation, and confusion species, as well as voice for birds.
- More than 660 illustrations covering all species and distinctive subspecies, males and females, birds in flight, juveniles and non-breeding plumages, where appropriate.
- More than 110 full-colour range maps for all species except cetaceans and vagrant birds and mammals.
- For birds, well-marked subspecies groups receive full accounts, and the distributions of subspecies breeding in the region are clearly mapped.
- QR code for every bird species, linked to complementary audiovisual material.

RECOMMENDATION: A must have for naturalists visiting the Galapagos Islands!

PUBLISHER’S SUMMARY: Determining properly where birds are in this changing world is of paramount importance for their conservation, and doing that at a continental scale is something that can be only achieved under a strong willingness of international cooperation. To do that, the European Bird Census Council (EBCC) is organised as a network of expert ornithologists that boost bird atlas work across Europe.

The first European Breeding Bird Atlas (EBBA1) published by the EBCC in 1997 was a milestone in European ornithology. The project of the second European Breeding Bird Atlas (EBBA2) was carried out by the EBCC network of partner organisations from 48 countries. In total, around 120,000 fieldworkers contributed data to the atlas, the great majority of them on a voluntary basis. As such this project constitutes one of the biggest citizen science projects on biodiversity ever. Data collection and analysis followed a rigorous scientific protocol, led by a team of researchers from ornithological institutes with many years of experience in atlas work.

The huge fieldwork effort resulted in unprecedented geographical coverage for a biodiversity atlas in Europe, including all areas up to the Ural Mountains and the Caspian Sea that were not well covered for EBBA1. These data were mainly collected for the period lasting from 2013 to 2017.

European Breeding Bird Atlas 2 presents information on all species reported to breed in the study period and some with more uncertain breeding status. A total of 556 species are treated with a full species account including maps, text and an illustration; information on 69 very rare or irregularly breeding species is presented in an Appendix. Full species accounts include distribution maps at a resolution of 50×50 km (usually showing abundance data), modelled distribution maps with a resolution of 10×10 km (for 224 breeding birds) and change maps documenting changes in distribution since the first atlas.

Original artwork illustrates all species with a full account. Illustrations were provided by 45 artists from 18 countries, with different styles and techniques, reflecting European diversity.

This book represents the most up-to-date source of information on bird distribution and change in Europe, and a great contribution to the global aim of understanding biodiversity to ensure its conservation.

RECOMMENDATION: A must have for all serious birders, ornithologists and conservationists of Europe! 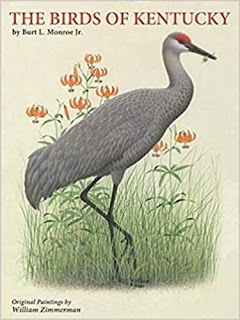 PUBLISHER’S SUMMARY: The first book of its kind to be published for the Bluegrass State, The Birds of Kentucky is designed to provide an accurate and scientifically rigorous description of all the species of birds found in Kentucky. This comprehensive guide features a wealth of information, including abundance records, migration dates, and additional reference material, and indicates whether a bird is a permanent resident, winter resident, summer resident, visitant, or transient. Additionally, author Burt L. Monroe reviews the history of ornithologists who have worked in Kentucky and outlines the physiography of the state as it relates to birding.

More than just a verbal portrait of Kentucky avifauna, The Birds of Kentucky includes fifty-one color paintings by the renowned wildlife artist William Zimmerman, whose work has been favorably compared to that of John James Audubon. In contrast to Audubon's romanticism and often tortuous style, however, Zimmerman offers us "comfortable" birds that look as if they are about to take wing and leave the page.

Beautifully illustrated and based on a lifetime of field observation and research, this book provides an excellent guide to the natural history of the birds of the Bluegrass.

RECOMMENDATION: A must have for those with a serious interest in the birds of Kentucky. 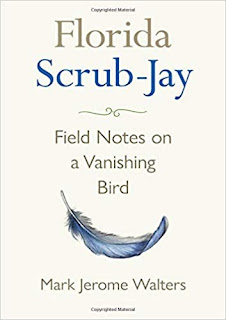 PUBLISHER’S SUMMARY: The only bird species that lives exclusively in Florida, the Florida scrub-jay was once common across the peninsula. But as development over the last 100 years reduced the habitat on which the bird depends from 39 counties to three, the species became endangered. With a writer’s eye and an explorer’s spirit, Mark Walters travels the state to report on the natural history and current predicament of Florida’s flagship bird.

Tracing the millions of years of evolution and migration that led to the development of songbirds and this unique species of jay, Walters describes the Florida bird’s long, graceful tail, its hues that blend from one to the next, and its notoriously friendly manner. He then focuses on the massive land-reclamation and canal-building projects of the twentieth century that ate away at the ancient oak scrub heartlands where the bird was abundant, reducing its population by 90 percent.

Walters also investigates conservation efforts taking place today. On a series of field excursions, he introduces the people who are leading the charge to save the bird from extinction―those who gather for annual counts of the species in fragmented and overlooked areas of scrub; those who relocate populations of scrub-jays out of harm’s way; those who survey and purchase land to create wildlife refuges; and those who advocate for the prescribed fires that keep scrub ecosystems inhabitable for the species.

A loving portrayal of a very special bird, Florida Scrub-Jay is also a thoughtful reflection on the ethical and emotional weight of protecting a species in an age of catastrophe. Now is the time to act, says Walters, or we will lose the scrub-jay forever.

RECOMMENDATION: A must read for those with an interest in the Florida Scrub-Jay. 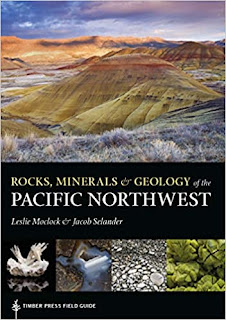 PUBLISHER’S SUMMARY: Rocks, Minerals, and Geology of the Pacific Northwest highlights100 rocks, minerals, and fossil types found in Oregon and Washington. Each entry has color photography that shows a range of possibilities in appearance and a description of the defining physical properties and textures. Lists of minerals organized by other physical properties like habit, hardness, and cleavage are included. Rocks, Minerals, and Geology of the Pacific Northwest also includes 40 landscape features viewable along trails in Washington and Oregon that will empower hikers to make observations and interpretations about how these features came to be.

RECOMMENDATION: A must have for those with an interest in the geology of the region!