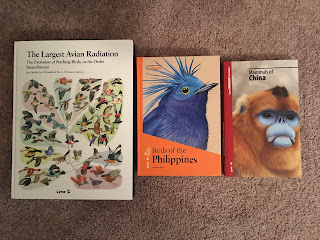 PUBLISHER’S SUMMARY: With more than 6200 species, the perching – or passerine – birds represent one of the most remarkably rapid proliferations of species. The traditional classification of birds, which was mainly based on comparative anatomical studies more than 100 years ago, could do little to resolve the relationships among passerines because they were generally too anatomically uniform. Therefore, the classification that was used for most of the 20th century was a practical arrangement, where the thousands of species were accommodated in a few broad groups based mainly on ecological adaptations.

Recent DNA studies have dramatically changed the understanding of passerine evolutionary relationships. Apparently, the passerines originated during the early radiation of modern birds, on the austral continents (South America, Antarctica and Australia), after a global catastrophe had wiped out most of the ancient terrestrial life, including large dinosaurs and early birds.

The Largest Avian Radiation reveals the remarkable new history of how passerines diversified and dispersed across the entire world. It also presents and explains the new classification, which reflects the phylogenetic history. The new insights reveal that many of the old evolutionary lineages comprise only a few species that remained in their area of origin or underwent limited dispersal. Only a small number of groups underwent significant proliferation of new species and just five (of 145) passerine families are represented on all continents but Antarctica. Even so, the global variation in species richness generally correlates well with the variation in productivity across different environments. We see how a seemingly constant overall rate of evolution of new species is possible because of rapid proliferation in new ecological niches, including archipelagos, and an extraordinary accumulation of endemic species in certain tropical mountain ranges.

In addition to describing the revised evolutionary history of passerine birds, the authors try to identify adaptational changes, including shifts in life-history strategies, that underlie major evolutionary expansions. Their aim is to further the development of a unified theory to explain how the prodigious variation of Earth's biodiversity is generated.

RECOMMENDATION: A must have for those with an interest in avian evolution!

PUBLISHER’S SUMMARY: The world's fifth-largest island nation comprises in excess of 7600 islands and islets, and is one of the most populous and ethnically diverse in all of Asia, with more than 180 native languages still spoken. To birders, however, the Philippines is famed for the country's remarkable endemic avifauna. Of the c. 770 species or distinctive subspecies groups covered by Birds of the Philippines almost 300 occur nowhere else on Earth. Sadly, the looming threat of extinction, due to sometimes rampant and ongoing habitat loss and fragmentation, imperils many of these species: among the endemic birds, no fewer than 75 are categorized as Vulnerable, Endangered or Critically Endangered. These unsurprisingly include some of the Philippines most sought-after birds, from the stunningly beautiful Palawan Peacock-pheasant to the emblematic Philippine Eagle, via an array of secretive pigeons, spectacular kingfishers, hornbills and broadbills, fancy woodpeckers, no fewer than 17 owls, and of course many babblers and flycatchers. If this was not enticement aplenty, in addition to the resident backbone, the islands receive many visitors, including migrants moving between northern Asia and Australasia, whereas others such as the globally threatened Chinese Crested Tern have only recently been discovered to winter in the Philippines.

- Taxonomy follows the HBW and BirdLife International Illustrated Checklist of the Birds of the World.
- Detailed texts covering status, habitat and behaviour, age, sex and geographical variation, voice, and confusion species.
- Over 1615 illustrations covering all species and distinctive subspecies, birds in flight, males and females, juveniles and non-breeding plumages, where appropriate.
- QR code for every species, linked to complementary audio-visual material.
- More than 620 full-colour range maps for all regularly occurring species.
- Well-marked subspecies groups receive full accounts, and the distributions of subspecies breeding in the region are clearly mapped.
- Local conservation status included.

RECOMMENDATION: A must have for those birding the Philippines!

PUBLISHER’S SUMMARY: This illustrated checklist covers China, a region with a great habitat diversity which is especially rich in mammalian life and attracts numerous wildlife watchers. Although not a traditional field guide, this book will equip both residents and visitors to the region with an easy-to-use resource that will allow them to quickly learn about the c. 600 species of mammals known to occur in the area.

This book is part of the Lynx Illustrated Checklists Collection created from the massive amounts of data, illustrations, and maps compiled for the Handbook of the Mammals of the World series, that has been distilled into useful and portable books for your visit to a specific destination.

Highlighted features:
- Short descriptive texts
- Indications of the main habitats used
- Distribution maps that include the latest published data
- At least one illustration per species complemented in some cases by others showing differences between sexes, subspecies, or various colour morphs.

RECOMMENDATION: A must have for those with an interest in the mammals of China! 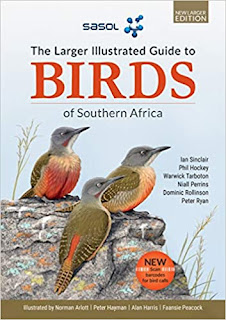 PUBLISHER’S SUMMARY: This larger edition is based on the updated and expanded fifth edition of the authoritative Sasol Birds of Southern Africa, which has been brought fully up to date by an expert panel of ornithologists, with additional contributions from two new birding experts. Greatly enhanced, this comprehensive, best-selling guide is sure to maintain its place as one of Africa’s most trusted field guides. It offers:

RECOMMENDATION: A must have for those birding southern Africa! This title is also available in a regular field guide size.