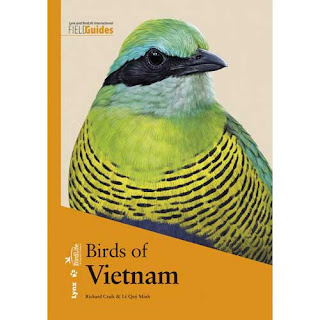 1) Craik, Richard and Le Quy Minh. Birds of Vietnam. 2018. Lynx Edicions and Birdlife International. Flexibound: 400 pages. Price: $59.95 U.S.
PUBLISHER'S SUMMARY: For birders, Vietnam is unquestionably one of the key countries to visit in Asia. A global biodiversity hotspot, Vietnam boasts 19 endemic species and subspecies groups, and another 27 near-endemic species, the largest number of any country in mainland South-East Asia. Among these are several species new to science discovered at the end of the 20th century, like Chestnut-eared and Golden-winged Laughingthrushes, or species rediscovered after long periods without records, such as the enigmatic Grey-crowned Crocias, all of them the result of a renewed wave of ornithological exploration in the decades since the end of the Vietnam War.

This book, the first comprehensive modern field guide dedicated to Vietnam's rich and diverse avifauna, describes all 916 species in text, illustrations and distribution maps.
Taxonomy follows the HBW and BirdLife International Illustrated Checklist of the Birds of the World. Detailed texts covering status, habitat and behavior, age, sex and geographical variation, voice, and confusion species. Over 1900 illustrations covering all species and distinctive subspecies, birds in flight, males and females, juveniles and non-breeding plumages, where appropriate. QR code for each species, linking to the Internet Bird Collection gallery of photos, videos and sounds. More than 870 full-color range maps for all species other than vagrants. Well-marked subspecies groups receive full accounts, and the distributions of subspecies breeding in the region are clearly mapped. Local species name included. 911 species; 37 endemics or near-endemics, 2 introduced, 71 vagrants, over 1900 illustrations and over 870 distribution maps.
RECOMMENDATION: A must have for those birding Vietnam! 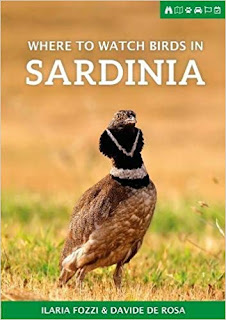 2) Fozzi, Ilaria and Davide De Rosa. Where to Watch Birds in Sardinia. 2018. Pelagic Publishing. Paperback: 140 pages. Price: $32.99 U.S.
PUBLISHER'S SUMMARY: Sardinia is in the middle of the western Mediterranean between Europe and Africa. Its location on the Mediterranean flyway makes it an important refueling stop for migrating birds – especially on its extensive wetlands. A popular destination for birders and naturalists, Sardinia has a great diversity of fauna and flora, along with rich cultural and historical attractions.

Where to Watch Birds in Sardinia is written by two ornithologists with extensive experience of Sardinian birding, provides detailed information on the 43 key birding sites in Sardinia. For each site the target species are highlighted, along with information on habitat, when to visit, other wildlife, facilities, access, how long you'll need, the photographic opportunities and recommendations for your visit. A map of each site helps with planning and navigation to the site.
Often described as a micro-continent for the variety of its ecosystems, Sardinia has mountains, forests, lowlands, gorges, wetlands, long sandy beaches and rocky shores. It is home to around 300 bird species, 41 mammals, 18 reptiles and 8 amphibians as well as a hugely diverse invertebrate fauna. Owing to its geographical isolation, altitudinal variation and limited human presence, Sardinia has retained many habitats that are favourable for the development and preservation of a large number of endemic plants, accounting for 10 per cent of the island's flora and including several orchid species.
Sardinia's 'must-see' birds include Greater Flamingo, Eleonora's Falcon, Purple Swamphen, Little Bustard, Audouin's Gull, Marmora's Warbler, Corsican Finch, Griffon Vulture and Barbary Partridge. In spring, April and May are the best months for migration, while for the autumn migration the best period stretches from the end of August to the end of October. Wetlands are the most important sites in springtime, with many species stopping for some days before going north. During the breeding season these areas are very important for Greater Flamingo, Audouin's Gull, Little Tern and several other species of waders, gulls and terns. The breeding season is also a good time to see 'special' resident species like the Little Bustard in display or to hear the flight call of the Corsican Finch. In winter, large concentrations of ducks and gulls are found on the island, with the occasional vagrant from Siberia or North America.
RECOMMENDATION: A must have for those birding Sardinia! 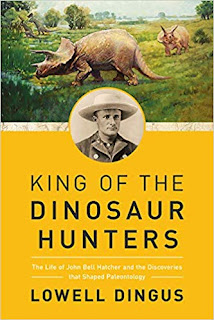 3) Dingus, Lowell. King of the Dinosaur Hunters: The Life of John Bell Hatcher and the Discoveries that Shaped Paleontology. 2018. Pegasus Books. Hardbound: 520 pages. Price: $35.00 U.S.
PUBLISHER'S SUMMARY: The story of the extraordinary adventures behind the man who has discovered some of the amazing wonders of natural history.     Every year millions of museum visitors marvel at the skeletons of dinosaurs and other prehistoric creatures discovered by John Bell Hatcher. The life of the “King of Collectors” is every bit as fascinating as the mighty bones and fossils he unearthed.
Hatcher helped discover and mount much of the Carnegie Museum's world famous, 150 million-year-old skeleton of Diplodocus, a slender-necked, long-tailed, plant-eater whose skeleton has captivated our collective imaginations for more than a century. But that wasn’t all Hatcher discovered.  During a now legendary collecting campaign in Wyoming between 1889 and 1892, Hatcher discovered a 66 million-year-old horned dinosaur, Torosaurus, as well as the first scientifically significant set of skeletons from its evolutionary cousin, Triceratops. Refusing to restrict his talents to enormous dinosaurs, he also discovered the first significant sample of mammal teeth from our relatives that lived 66 million years ago. The teeth might have been minute, but this extraordinary discovery filled a key gap in humanity’s own evolutionary history.
Hatcher’s discoveries form the bases of some of the most beloved and well-known collections and institutions in the world―Yale, The Peabody Museum, Princeton University, the Carnegie Museum, and more. Nearly one hundred and twenty-five years after Hatcher’s monumental “hunts” ended, acclaimed paleontologist Lowell Dingus invites us to revisit Hatcher’s captivating expeditions and marvel at this real-life Indiana Jones and the vital role he played in our understanding of paleontology.
RECOMMENDATION: For those with an interest in the history of paleontology.

Posted by Birdbooker at 4:31 PM