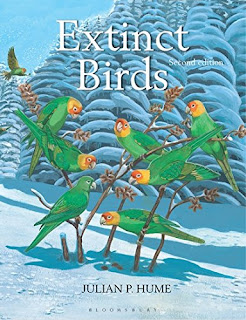 1) Hume, Julian P.. Extinct Birds (Second Edition). 2017. Helm. Hardbound: 608 pages. Price: $90.00 U.S.
PUBLISHER'S SUMMARY: Covering both familiar icons of extinction as well as more obscure birds, some known from just one specimen or from traveler's tales, Extinct Birds looks at hundreds of species from the sub-fossil record--birds that disappeared without ever being recorded.

Julian Hume recreates these lost birds in stunning detail, bringing together an up-to-date review of the literature for every species. From Great Auks, Carolina Parakeets, and Dodos to the amazing yet completely vanished bird radiations of Hawaii and New Zealand, via rafts of extinctions in the Pacific and elsewhere, this book is both a sumptuous reference and an amazing testament to humanity's impact on birds.
A direct replacement for Greenway's seminal 1958 title Extinct and Vanishing Birds, this book will be the standard reference on the subject for generations to come.
RECOMMENDATION: A must have for those with an interest in extinct birds. 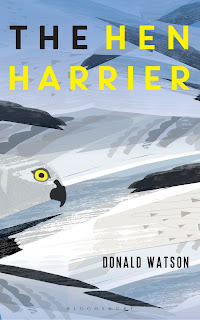 2) Watson, Donald. The Hen Harrier. 2017 (1977). Bloomsbury. Hardbound: 416 pages. Price: $24.00 U.S.
PUBLISHER'S SUMMARY: An acknowledged classic of narrative nature-writing, Donald Watson's The Hen Harrier (originally published in 1977) was the culmination of a lifetime's study of this beautiful upland bird. A gentle, warm and wonderfully written book, The Hen Harrier stems from an age of 'amateur' conservation, from the pen of a man who cared deeply about birds and their habitats, especially of the Scottish borders where he conducted much of his research and painting. The book was among the last of a dying breed; it would be thirty years or more before writing on our natural history would again reach the heights of accessibility to nature-lovers exemplified by Donald Watson and his peers.

The book starts with Watson setting down more or less everything known about harriers – which at that time often consisted of information sent by letter to the author, rather than published in a journal – before moving on to the story of Watson's years studying nests in the south-west of Scotland.
With a foreword by conservation champion Mark Avery, this edition of Watson's greatest work is particularly timely. The conflict between grouse-shooting interests, which has overseen the virtual extinction of the harrier as a breeding bird in England through illegal persecution, and an increasingly vocal conservationist lobby is the number one conservation issue in Britain today.
Donald Watson's narrative soars like a sky-dancing harrier throughout this book. Read it, and be taken back to a simpler age of nature conservation by a true master of the art.
RECOMMENDATION: A must have for those with an interest in the Hen Harrier.

Posted by Birdbooker at 3:46 PM