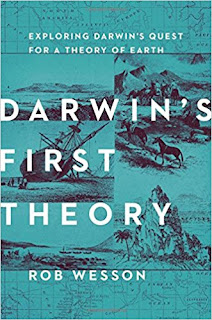 1) Wesson, Rob. Darwin's First Theory: Exploring Darwin's Quest for a Theory of Earth. 2017. Pegasus Books. Hardbound: 457 pages. Price: $29.95 U.S.
PUBLISHER'S SUMMARY: An acclaimed geologist leads the reader on an adventure through the landscape that absorbed and inspired Charles Darwin.
Everybody knows―or thinks they know―Charles Darwin, the father of evolution and the man who altered the way we view our place in the world. But what most people do not know is that Darwin was on board the HMS Beagle as a geologist―on a mission to examine the land, not flora and fauna.
Retracing Darwin’s footsteps in South America and beyond, geologist Rob Wesson treks across the Andes, cruises waters charted by the Beagle, hunts for fossils in Uruguay and Argentina, and explores sites of long vanished glaciers in Scotland and Wales. As he follows Darwin’s path―literally and intellectually―Wesson experiences the land as Darwin did, engages with his observations, and tackles the same questions Darwin had about our ever-changing Earth.
Upon his return from his five-year journey aboard the Beagle, after examining the effects of earthquakes, tsunamis, volcanic eruptions, and more, Darwin conceived his theory of subsidence and uplift‚―his first theory. These concepts and attitudes―the vastness of time; the enormous cumulative impact of almost imperceptibly slow change; change as a constant feature of the environment―underlie Darwin’s subsequent discoveries in evolution. And this peculiar way of thinking remains vitally important today as we enter the human-dominated Anthropocene age.
Expertly interweaving science and adventure, Darwin’s First Theory is a riveting and revelatory journey around the world with one of the greatest scientific minds in history.
RECOMMENDATION: For those with an interest in Darwin and/or geological history.
Posted by Birdbooker at 3:16 PM