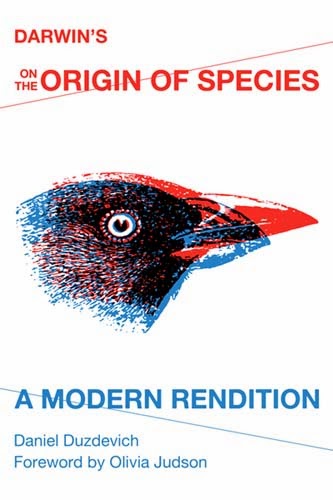 1) Duzdevich, Daniel. Darwin's On the Origin of Species: A Modern Rendition. 2014. Indiana University Press. Paperback: 313 pages. Price: $30.00 U.S.
PUBLISHER'S SUMMARY: Charles Darwin’s most famous book On the Origin of Species is without question, one of the most important books ever written. While even the grandest works of Victorian English can prove difficult to modern readers, Darwin wrote his text in haste and under intense pressure. For an era in which Darwin is more talked about than read, Daniel Duzdevich offers a clear, modern English rendering of Darwin’s first edition. Neither an abridgement nor a summary, this version might best be described as a “translation” for contemporary English readers. A monument to reasoned insight, the Origin illustrates the value of extensive reflection, carefully gathered evidence, and sound scientific reasoning. By removing the linguistic barriers to understanding and appreciating the Origin, this edition aims to bring 21st-century readers into closer contact with Darwin’s revolutionary ideas.
RECOMMENDATION: Anyone with an interest in evolution should read this book.

Posted by Birdbooker at 4:29 PM