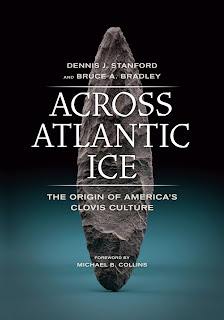 SUMMARY: Who were the first humans to inhabit North America? According to the now familiar story, mammal hunters entered the continent some 12,000 years ago via a land bridge that spanned the Bering Sea. The presence of these early New World people was established by distinctive stone tools belonging to the Clovis culture. But are the Clovis tools Asian in origin? Drawing from original archaeological analysis, paleoclimatic research, and genetic studies, noted archaeologists Dennis J. Stanford and Bruce A. Bradley challenge the old narrative and, in the process, counter traditional—and often subjective—approaches to archaeological testing for historical relatedness.
The authors apply rigorous scholarship to a hypothesis that places the technological antecedents of Clovis in Europe and posits that the first Americans crossed the Atlantic by boat and arrived earlier than previously thought. Supplying archaeological and oceanographic evidence to support this assertion, the book dismantles the old paradigm while persuasively linking Clovis technology with the culture of the Solutrean people who occupied France and Spain more than 20,000 years ago.
RECOMMENDATION: For those with an interest in the prehistory of North America. 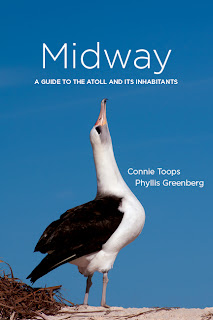 2) Toops, Connie and Phyllis Greenberg. Midway: A Guide to the Atoll and its Inhabitants. 2012. LasAves. Paperback: 84 pages. Price: $14.95 U.S.
SUMMARY: Set like a gem in the vast Pacific Ocean, halfway between Tokyo and San Francisco, Midway is a nature-lover’s dream. The atoll hosts the world’s largest albatross nesting colony. Amazingly approachable tropicbirds, terns, boobies, and frigatebirds also nest there. Reefs surrounding Midway teem with rainbow-hued corals and fishes, as well as sea turtles, monk seals, and Hawaiian spinner dolphins.
This remote outpost influenced world affairs on several occasions. Notably, the 1942 Battle of Midway changed the course of World War II. View the confrontation through the eyes of four survivors, and learn how Midway has generated recognition on a scale well beyond its physical size.
Whether your interest is nature or history, Connie Toops’ informative text and Phyllis Greenberg’s compelling photos provide everything you need to know—and will definitely inspire you—to visit Midway.
RECOMMENDATION: A must have for those with an interest in the Midway Atoll! You can order the book here: http://lasaves.biz/ 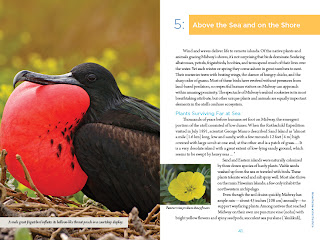 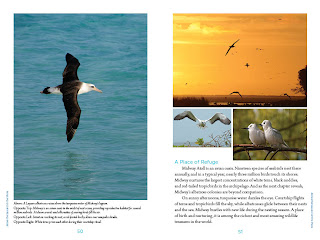 This title is available through Buteo Books here.
Posted by Birdbooker at 2:59 PM